The UK has been gripped in the midst of a Siberian storm that lasted a week or so, of course a little snow ground the UK to a standstill, we just can’t cope with snow. But Mustang Maniac ploughs on nevertheless. See what we did there? Anyway, just before the snow landed we had a our friend and customer Lance drop his ’65 coupe down to us that needed some more upgrades, one of which was a special order that had just arrived in for him.

Here is the process of those upgrades, all very subtle and make a huge difference.  Except that special order which isn’t subtle by any shape of the imagination! 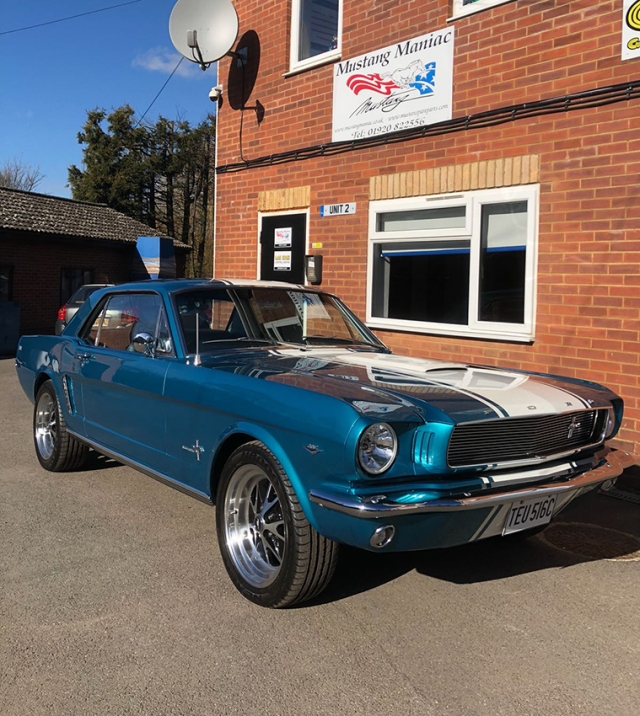 Although Lance was posing in his sunglasses here, they were soon swapped out for snow goggles a few days later! 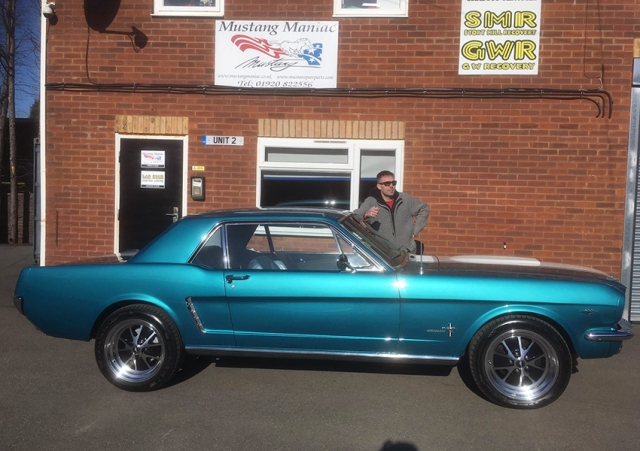 The side shot above shows the first set 17″ “Styled Steel” alloy rims in the country and they were fitted to a Mustang. The fronts are 215/50R17 7Jx17 and a larger 225/50R17 8Jx15 at the rears for the staggered look. In the garage we were asked to look at the lights to improve them. This was a simple upgrade with Mustang Maniac’s crystal clear headlight upgrade kit for a more modern look. You can easily see the difference between the old and new when they are next to each other. 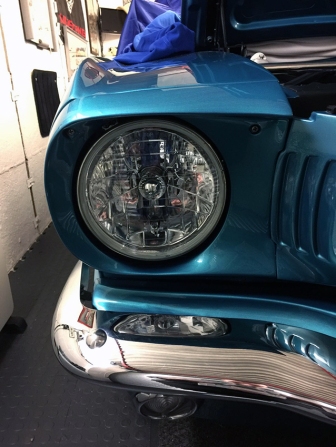 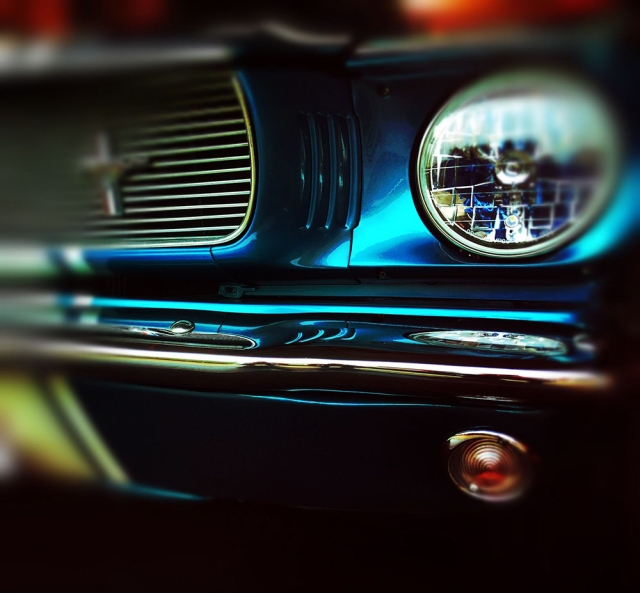 The link for these lights can be found on the WebShop here or  cut the this link – https://mustangmaniac.co.uk/part/36/7958/headlamp_conversion_kit   Lance’s response to this upgrade was “it’s like chalk and cheese, I can drive at night.”  The rear end also got a little upgrade with some new lenses to go with his previously installed LED’s.

Keeping on the lights theme and poor visibility we also have various colours of LED’s for the dash. Some may think it’s a gimmick but honestly they make a massive difference compared to the incandescent bulbs and filters originally fitted. Lance asked for the popular blue set to be fitted. this was fine until the blue lights didn’t look right and so the rev counter was also upgraded to match. Lances response to the upgrade – “I can see how fast I am going at night as well now!” These bulbs can be purchased from here or this link – https://mustangmaniac.co.uk/part/36/7115/64-65_instrument_panel_led_set 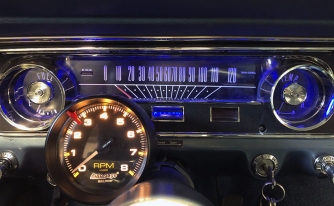 The next upgrade was a special order also an upgraded special order at that. Lance wanted to hear his music and wanted a sub woofer “upgrade”. This kit contains the mounting board, 2 x 275w speakers, the 250w amp and all the wiring and fittings as standard. However the upgrade to the special order was to swap out the 250w amp with a 500w version. The behind the seat kit can be found here or this link – https://mustangmaniac.co.uk/part/28/84/64-73_speaker_behind_rear_seats_

This was going to be done properly and not just drag the wires under the carpets, so panels and seats were removed, trims and all cable wrapped correctly for that much sought after stock look. 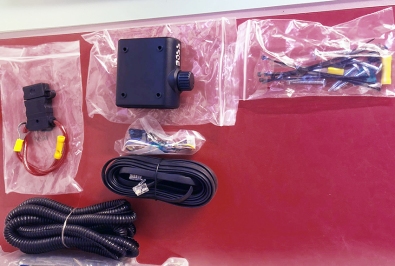 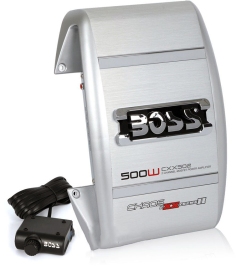 The board is a straight replacement with the speakers already mounted and just needed the wires routed. Paul loves a bit of wiring and made it look easy and stock all linked to the starter solenoid. The last little touch was the bass adjustment that Paul neatly mounted in the glove box out of sight. Lance made a comment about this little addition, “I can turn the bass up on my Frank Sinatra now when I’m driving at night.” 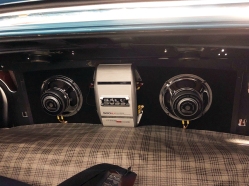 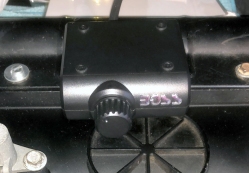 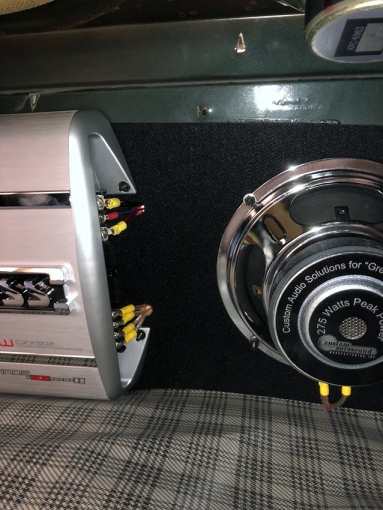 Lance’s response to the upgraded and thumping sounds? “I can hear my music at night now!” There was one last thing, his air filter was upgraded to the Edelbrock hi-flow 3″ pan with a 1.5″ drop. This allows more air into the carb and thus if tuned correctly a little more power.

As we spent a fair bit of time on the car it was “Yogi’ed” as well, a Yogi sticker was stuck under the hood by the bear himself. Lance’s comment on this was sort of predictable, “At least it can’t be seen when I’m driving at night.” 😀

This has moved along quite quickly with the exhaust being fitted, Yogi does his thing and makes it fit like a glove and made some bespoke joins as a result. What you don’t see makes all the difference as well. We have seen some “one-off, bespoke and hand-made” exhaust systems that have been taken off the car and replaced with our systems within a matter of days. Just because you can’t see it – doesn’t mean it can be given any less attention to detail. 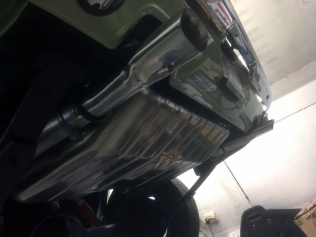 Witht he exhaust in place we prepped the engine by pumping the oil around the engine, filling the carb bowls with fuel and added a little in the intake ready for the fire up. Default carb settings were made and Yogi’s sixth sense for a timing set up. The result was this a first time fire up of the engine. You will notice Yogi quickly moves in with the screw driver to start adjusting mixtures and settings to hold the idle while the timing was then adjusted. As per usual this will be taken for a road test and then adjusted properly.

The topside of the car got the same attention to details with the hood cables being fitting and closed the hood. Yogi walked away with another smile on his face for a well earned cup of tea. 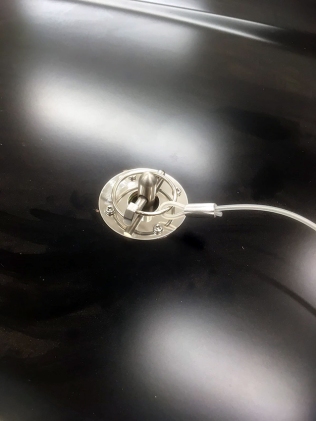 We have had some interest in the very limited run of stickers we had made on a few of our cars, “Born to Perform”. There was only few of them made for us, but the interest has been shown. We are asking if there is enough demand for a special order; should we get a another limited batch made? 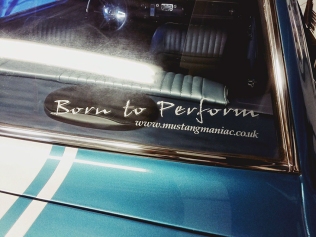 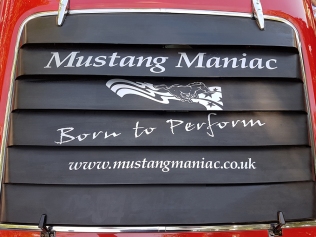 Let us know what you think.

10 Responses to Sunglasses To Snow Goggles