While we have been busy posting about our SEMA 2016 trip, there has been a few changes going on behind the scenes. We have removed the “graveyard” where the old cars awaiting our magical touches. And will be replaced with a “little project” Adam has in mind. Those cars will now be going into storage in the big shed for now. Yogi realising that these will be coming his way soon!

We are still planning on posting the SEMA 2016 day four as well as the Shelby Heritage Museum tour we promised you over the coming week. We had taken almost nine hundred pictures that day and we still need to sort out the better pics to upload for you.

A first for the Restoration industry?

So back to the what we do best, showing you what we do. As we like to think we are pretty unique we have made some serious decisions while we were in Las Vegas over a beer or two. We currently have our Mustang Maniac Forum that is popular, but it has started to die down. This is not unique to our forum though, it’s happened to a lot of other forums too. The mobile phone is the communication device for emails, photo’s and keeping up with the world on the go. So logging into a forum with passwords on a mobile, leaving a reply, then waiting for a response all takes just to long in this busy world of ours. So we had an idea and are very excited it, that idea has taken off very well with a small “trial” invited group of members.

We have created a Facebook Chat group called “Mustang Maniacs“.

From there you can see some real-time updates from us along with updates from other members of the group. Now this group is going to be all about Mustangs or Fords, so there is none of this “I’m popping out for a pint of milk” rubbish. However if you said “I’m going out in my Mustang to an event” – that’s a whole new conversation to be had. We have now opened this up this new group to everybody to upload their car pictures, stories for others to comment on or just to read what we and others are up to. If you have a question – members from the Mustang Maniac forum may have that answer for you, on the group now. If you have a technical sales question; we still request you email adam@mustangmaniac.co.uk for further details as normal, we won’t be doing business on the group. There are moderators who will be keeping an eye on things too, so keep it nice and no moaning, or you could find yourself blocked. To show this all in action we had a three-way example view. We had to get a customer’s car out from storage to be moved to the panel shop. Lance “live” streamed the move to the Mustang Maniacs Group, we also took pictures of the live streaming in progress for the blog here. Filming the filming if you like.

The car being moved. 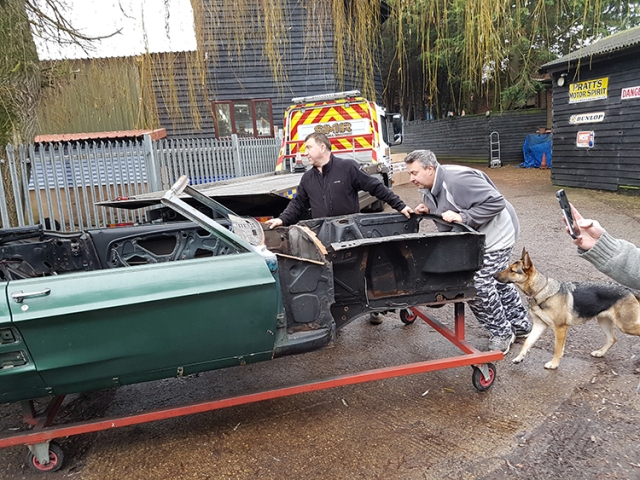 Lance filming and the live stream 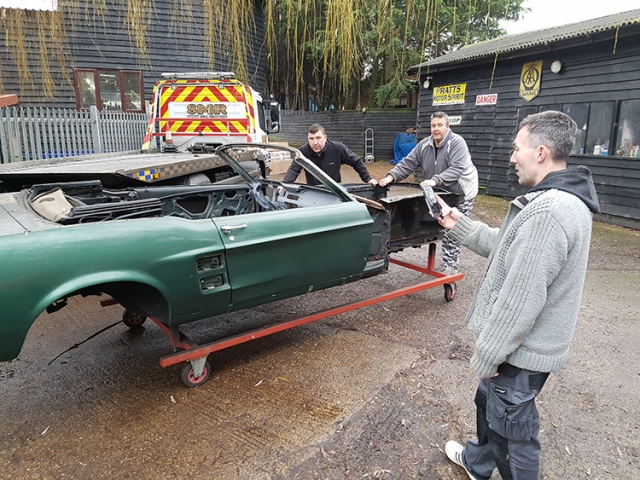 The live feed as it happened

With the car moved into the workshop Yogi took a selfie for the group:

What was he looking at?

So we hope you can see how want it to work, a snapshot in time of Mustang Maniacs, and like minded people. We want people to interact with us, we shall try to post and upload where we can. Of course you can post your own pics and comment on others as you see fit. Remember; banter is good, moaning and insults are not. Show us your projects, tell us your thoughts, ask us what we think, send us a message, anything car related.

Let us know what you think.

So how many other car restorations out there show you what they do as it happens? Of course the blog is here to stay, and it will continue to give a little more in-depth behind the scenes as we always do. For a quick moment in time or chat with us and other members; join us at Mustang Maniacs! That leads us very nicely into the next section:

This is a new project that the Yogi will be starting soon. It’s a ’67 289cid Convertible, which needs some serious attention. We aim to bring this project to you step by step as you would expect. This is the car that was moved in the live stream from above. 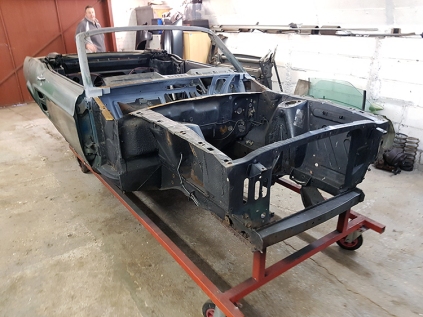 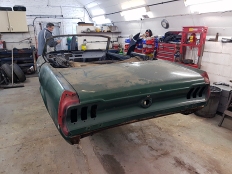 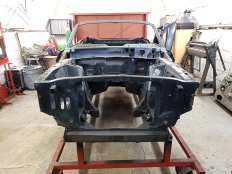 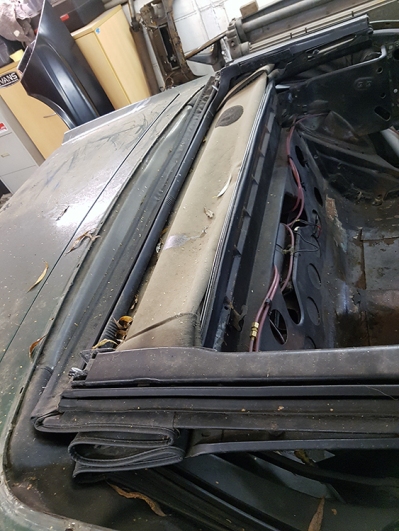 We are looking for a nickname for this car now. Perhaps the owner Mark may have an idea for us?

The ’69 with the new front end has been taken off the jig after Yogi had welded the new panels back in place. The car was moved to Yogi ‘s work shop (Yogi says that’s an upgrade for a car accommodation), where the work can be continued under the car. The underside will need to be rubbed down in order for the final welding to be completed. The rubbing down and grinding work can be heard going on in the background of the live video we mentioned above. 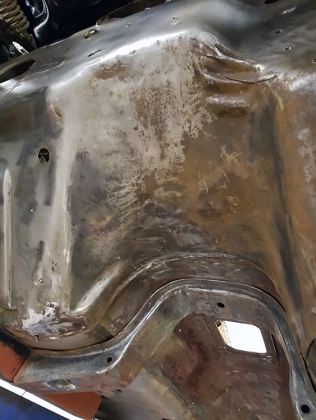 The new front looks great and won’t be long before she is off to paint. 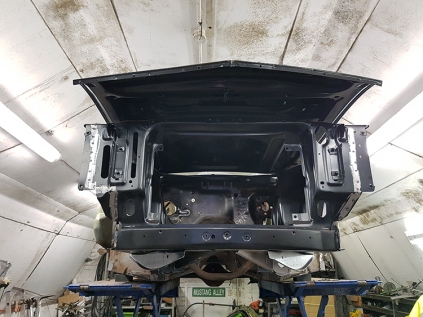 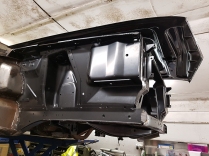 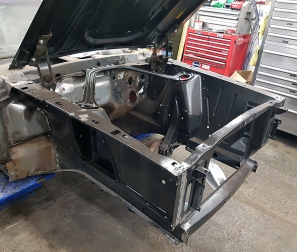 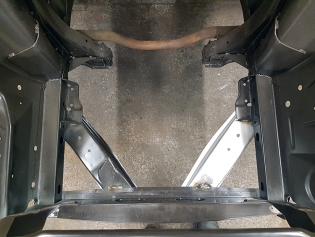 The last few weekends since Chris has got back from Vegas he has been working hard to get his car ready for some metal work and body prep. Chris had stripped and rubbed the inside of the engine bay down and has started to paint it. Being in the storage shed Chris had a flood light on the engine bay. from a distance it looked like a little star shining down on him! 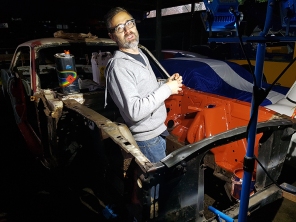 We suspect that the complete engine bay will be done by the end of the day (Saturday). A good start and there is nothing like seeing your first coats of paint going on the car. It transforms the whole car from a work in progress to a restoration under way.

Adam like to keep an eye on things for sale and see what the Mustang Market is up to. On this occasion he contact a guy who was selling an engine. The story is that the previous owner took it out of a car and nobody knows much about the engine. Adam was sent a few photo’s and bought it straight away. Why, because he knew this was “special” to the other blocks that come up for sale. The chrome rocker covers were rusty as was the sump. No problems there as they can be replaced. But taking the rocker covers of the engine, Adam’s suspicions were correct. He had found a little diamond in the rough. Adam and Yogi 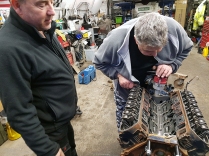 What we have here is a brand new block with a very nice set of GT40P heads on it.

The guys continued to strip the rest of it apart to see what was going on. 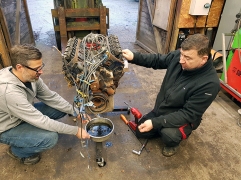 This was a new rebuilt engine and the cylinders still had the honing marks on them. The timing chain was new as were the valves, cam and the cam rollers.

What did Adam think? Well, they say a picture speaks a thousand words. Speaking of thousands; Adam reckons the work that had gone into the engine and the use of Ford stamped parts, “You can easily add a nought to what I paid for this engine, bargain!” Shame that luck didn’t run with him on the card tables at Las Vegas!

Adam pointed out the differences on the heads and how he spotted it. The GT40P heads needed better springs to make use of the valve openings depending on cam and the larger exhaust porting. Headers will need to be specific GT40P fits. The headers are right up there with the fabled “HiPo” units, apart from modern alloy heads this is about as good as it got. But a lot of people want originality and more power. What we have here is both.

Next week we intend to be concluding our SEMA 2016 posts.

5 Responses to A Restoration First?