Posted on December 9, 2016 by Mustang Maniac

Thursday 3rd November 2016. SEMA has been a pretty awesome show and we have loved every minute of it so far. But, this afternoon of the third day we had a special catch up with a friend of Adam’s and and official interview. The suspense is now over as we can reveal that it was Cleo Shelby, the fifth and surviving wife of  the late Carroll Shelby. Adam had arranged to meet up with his long time friend Cleo at a place of her choosing, where he had a more private conversation shortly before Chris joined Adam with a whole heap of questions ready to ask Cleo. The rest of us being Yogi, Gary, Jason and Mart turning up a few minutes later and we all sat down with her after introductions and had a drink or three with her.

First a little about Cleo;

After the sad passing of Swedish-born Lena Dahl Shelby in a highway accident in 1997, Carroll insisted he would never marry again. Four months later he married Cleo Patricia Marguerita Shelby in Las Vegas. Cleo was a vivacious Briton who was always by his side, even as she pursued her interests in flying, art and jewellery. Carroll initially meet Cleo in 1970. About that first meeting, Cleo told us that when Carroll first saw her she was getting of a car in her full evening wear and jewellery. Carroll thought she was a princess and started to talk to her and they hit it off straight away. Carroll also told Cleo that he was going to marry her at that first encounter. He had to wait a while, they were indeed married some 27 years later. There are relatively few photo’s of Carroll and Cleo together, so we found some stock images here. 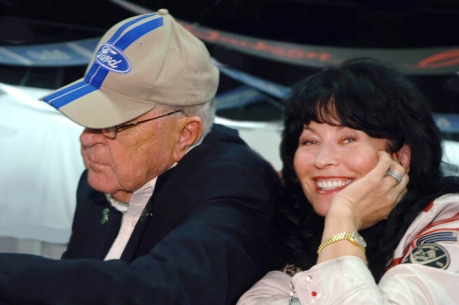 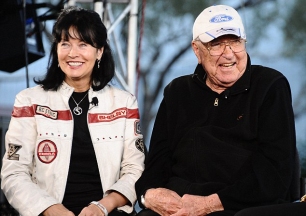 Chris was asking lots of questions in his official capacity for Classic American magazine. As this was going to be an exclusive we won’t repeat everything she told us. But, Cleo was fantastic and answered everything thrown at her from all of us at some point. Some of it will be in the interview, some of it certainly won’t. Such a classy lady and she has a great sense of humour too. We can reveal a little story about when Carroll was taken seriously ill, he needed to get to a hospital as an emergency which was miles away. Their aeroplane was standing by, but the pilot was told to “get out of the way”, as Cleo (who is fully qualified pilot) had at the time over 4000 flying hours, compared to the relatively small amount from the pilot. Needless to say Cleo got Carroll to the hospital and he was treated to fight another day. Stories like that you just don’t read about. So it seems this lovely lady can certainly lay the law down when she needs too. We didn’t take photo’s during the chat and Chris’s interview as we saved those for outside in the afternoon sun. Cleo is quite a private person and keeps herself very much to herself, but she agreed to sign our SEMA passes, and just about everything else the guys put in front of her. After an absolutely fascinating two full hours with Cleo, it was time to leave as Cleo had another meeting to attend, which it looked like she was going to be late for now. We all went outside for that impromptu photo shoot, trust us, we have quiet a few pics, here are only a small sample of the ones we took. Chris was taking the official photo’s for the Classic American Magazine to go with the interview of course, but we grabbed a few of our own too. 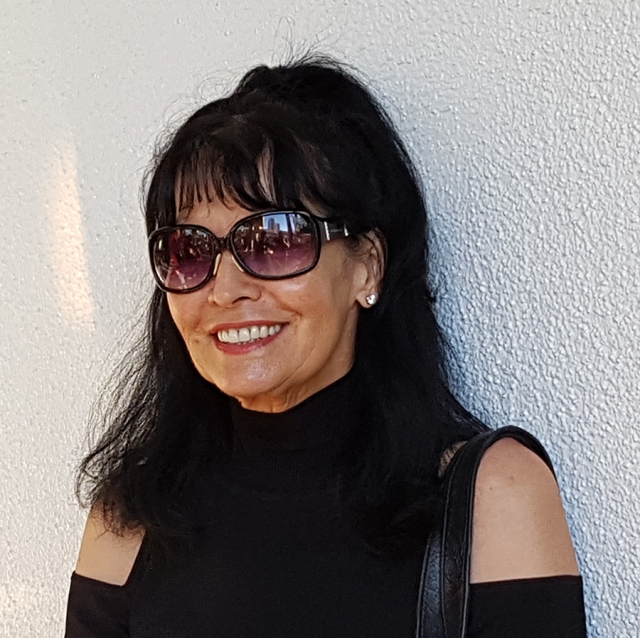 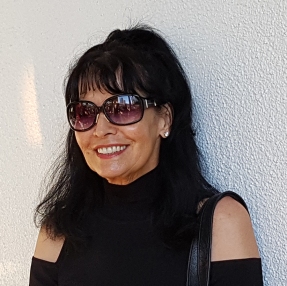 The Mustang Maniac “core”, Adam & Yogi had their pic(s) taken first as you would expect. 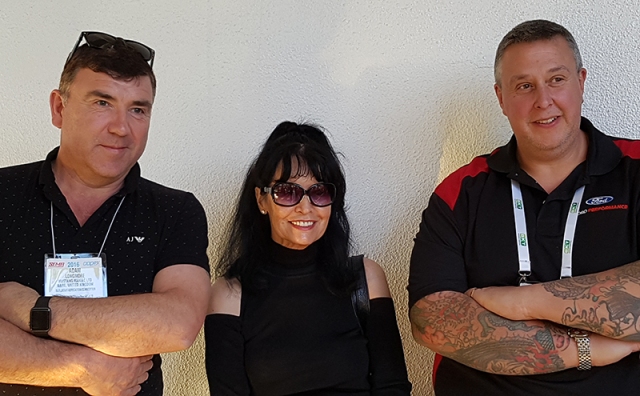 Then the rest of the guys also got in for a photo, Gary, Adam, Jason, Cleo, Mart & Yogi. Now there’s one for the album and to tell your grandchildren!

There was a lot of people looking to see what was going on, and taking their photo’s of us, as we were taking ours. We did hear a comment from a guy to his friends, “Did you see who that was, how did they get to meet her?” Adam replied with, “Not bad for a small time parts dealer eh?” They looked a little blank at his response, to which Adam just smiled. This has become a little bit of an in-house, joke saying for Adam, if you know Adam then you will understand the story behind it. Adam tells us that there are some readers out there who will know exactly what it means.

We all escorted Cleo back to her car and chatted some more on the way, we were part of her entourage for the day so it seemed. We said our goodbyes, Cleo gave us all a hug and kiss. Adam had a few more quiet words before Cleo got in her car and left with a big smile and a wave. We walked back to the SEMA show still slightly shell-shocked to meet such a high-profile person in the automotive world. We asked Adam why didn’t he mention Cleo before to us? He replied with a typical Adam-ism “I know a lot of people, I don’t need to name drop.” With that, we all knew what he meant. It only leaves one thing to say to a very busy lady:

Thank you Cleo for taking some time out of your schedule to catch up with us.

Later that evening we went out to our local eatery Wingstop, 3910 S Maryland Pkwy, Las Vegas. NV 89119. We had been looked after so well by a young lady called Morgan, she had asked us where we had been, so we told her SEMA. She told us that she would love to have gone to see it. With that Adam had sparked an idea. Adam asked Chris to get her to one side as he was going for another free refill, as he had a little surprise for her. Adam had a spare ticket and wanted to give it to Morgan. 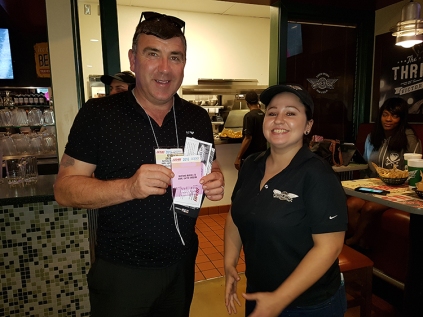 Morgan was absolutely delighted and a little overwhelmed that some strangers would do such a thing for her, you just can’t buy smiles like this. Needless to say Adam got another hug from a young lady who was lost for words. 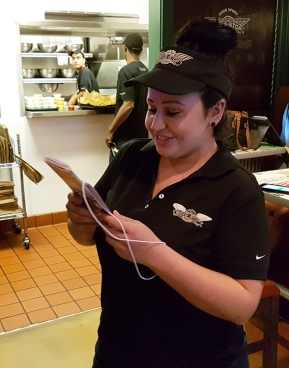 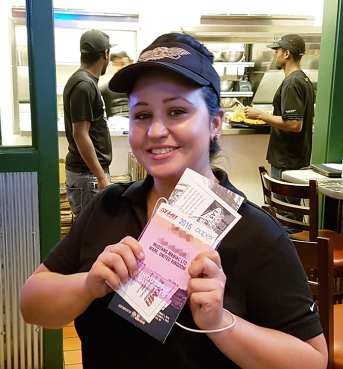 During the evening the beer never seemed to stop flowing for some reason. A fantastic way to end the day. Cleo made our day, so Adam (being Adam), came to the rescue and made a young lady’s day too. Morgan posted a great picture of her inside the SEMA show for the final day with big thank you to Mustang Maniac.