Things have calmed down a little we are pleased to say for a few days at least where we are back to the servicing and TLC of our customers cars, this in turn allowed us bit of spare time to sort out some space for yet more stock from another delivery of little goodies for the Mustang Maniac WebShop. We will show you the new items a little later in the blog. But we start this week with the popular Park & Pic.

This is Paul P’s beautiful ’66 convertible that was in to us for a little work and our special brand of TLC. Part of the work was the subtle instrument cluster change, instead of the standard black faces for the dash, this set of gauges has the clean fresh white face look which simply overlays the originals. Click here for the link in the WebShop. 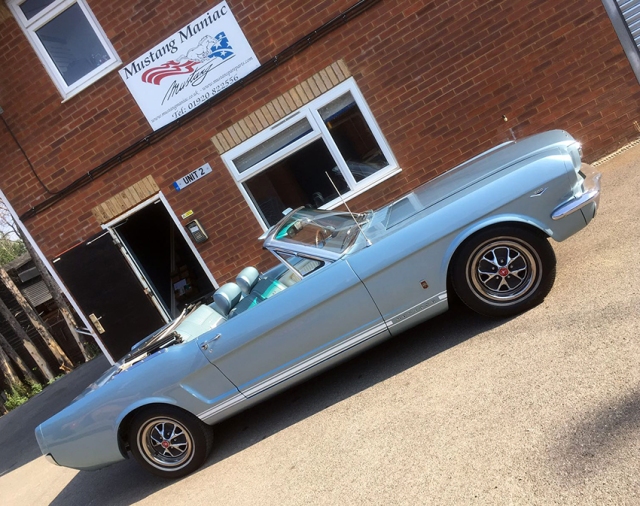 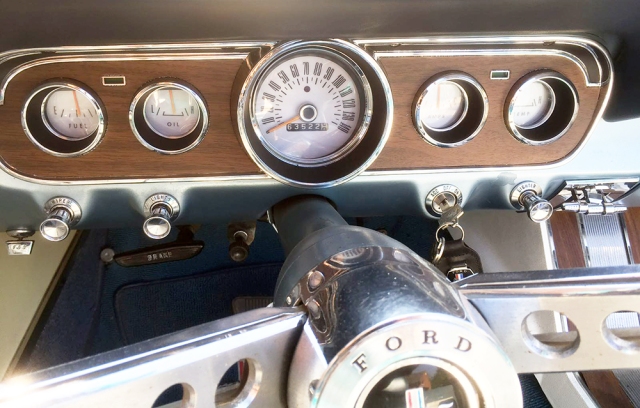 The look of these clean line gauges fits in perfectly with the Pony interior colour scheme. Under the hood had some work done with few little replacements here and there. All of course wrapped with OEM look wire loom tape.

We mentioned our delivery of new parts and the new part we are quite excited about is the arrival of our LED 7″ Front headlights. We were asked about these a while ago so we thought we would get a set to try them out to make sure they are 1) legal and 2) any good, we shall see, literally we hope.

These quality made headlights will plug into the standard light connectors so there shouldn’t be any need for butchering wires. A full set of instructions and set up is provided with each kit.

Like we said if they are any good they will appear on the WebShop, so watch this space, well the WebShop actually! 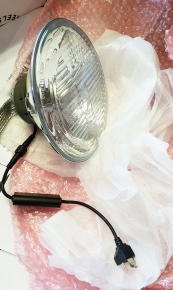 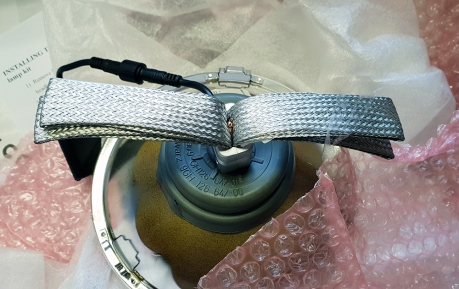 We have got a set of Mustang Fender Emblems in and they are a little different to the norm, ideal for that resto-mod look. We have the chrome effect and now the black look. 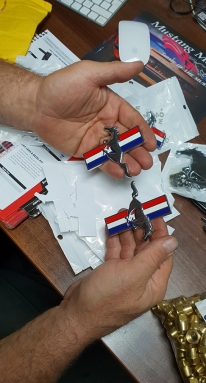 So, if you fancy a nice dark horse to go with your black grill – the choice of our very own new “Enos” brand emblems is now all yours.

Adam doesn’t like to be told that something is unavailable. We recently done some suspension work and Adam’s stash of washers had been used up. These particular washers are the leaf spring eyelet washers for the chassis legs. As Adam was told “no they are not available” he had his own made and zinc coated.

Somebody has recently asked Adam for a few sets of these washers who is not exactly a good customer should we say, and guess what? Adam’s batch of these washers are also “unavailable” too! But of course our proper Mustang Maniac customers will get them fitted as required, which in turn will be taken from the large box within the hardware storage area, that contains rather a lot of them should we also say. 😉

A kind customer had sent us a link to a pretty amazing story that has been buzzing around the Mustang Network for a week or so now. So we thought we would share it with you as well.

Calling it the “Holy Grail” of lost collector cars, Barrett-Jackson has announced, with Shell and Pennzoil, the discovery of Shelby American’s 1967 Shelby GT500 EXP prototype, a car known as “Little Red.” The announcement was made during the annual Woodward Dream Cruise in Michigan, but the car was located and verified on March 3 of this year, according to the announcement.

“Little Red is the only GT500 coupe (hardtop) built by Shelby American,” according to the announcement. It also is the only Mustang GT coupe ordered with and factory-equipped with dual-quad carburetors. “The team who discovered Little Red was led by (Craig) Jackson and classic car restoration specialist Jason Billups, and consisted of leading experts who located the vehicle in rural North Texas, where it has been stored by the same owner for more than two decades,” according to the announcement. “The discovery of Little Red, which was largely presumed destroyed after years of searching, is considered one of the most significant finds in American car collector history. “Finding Little Red is the discovery of a lifetime,” Jackson was quoted. “This Shelby prototype has been one of the most sought-after and elusive vehicles in postwar history. Countless enthusiasts and experts have searched for Little Red since it went missing in the 1960s. Many believed it was destroyed when the car was no longer needed. “I’m excited to announce that was not the case. We’ve found Little Red and we intend to meticulously restore this legendary car back to its original glory.” According to the announcement, the big-block Shelby notchback coupe was one of two experimental cars created by Ford and Shelby American.

“It was a pivotal developmental car with a variety of ideas put into play, from a restyled body to adding a Paxton supercharger to the big-block engine,” the announcement said. “Under the direction of Lee Iacocca, the car eventually became the model for Ford’s popular 1968 Mustang California Special before it was moved to storage and presumably lost. The other experimental notchback was dubbed the Green Hornet. It was during the restoration of that car that Jackson and Billups discussed searching for Little Red.

“Locating Little Red was tantamount to finding the proverbial needle in a haystack,” Billups was quoted. “After our initial research we realized that, like others before us, we were using the wrong search criteria. Everyone looked for Little Red using the Shelby serial number, which would eventually lead to a dead-end. We took a different approach and located the car’s original Ford VIN number, which wasn’t easily discoverable. That VIN led us to its original registration and eventually to its last owner.” Initial contact with the car’s owner was made through social media in February. Billings and the car’s owner met in Dallas. On March 3, Billings, automotive journalist Al Rogers and Mustang/Shelby expert Todd Hollar received access to the property where the car had been for the past 20 years. The car’s authenticity was verified with help from Mustang expert Kevin Marti.

“Walking up to Little Red was like being on hallowed ground,” Rogers said. “This car was long thought by the experts to be forever lost to history. Even the owner was not aware that his vehicle was Shelby American’s iconic 1967 Shelby Experimental Coupe.”

Jackson told Fox News that instead of crushing the car, Ford sent it to a dealership in Colorado, where it was purchased by a Vietnam veteran who had no idea of the car’s history. Later, the car was sold to a Wyoming resident who eventually moved to Texas and stored the car, no longer in running condition, in a container. When the container was the subject of a theft and parts were taken from the car, the owner moved the car to his cousin’s property in Weatherford, Texas.

The announcement said the car’s restoration will be documented in detail on a special website. Shell and Pennzoil will support that documentation. “As brands that have been part of American and worldwide automotive history for more than 100 years, we understand the importance of heritage,” Mark Henry, brand and communications manager, Shell Lubricants, said in the news release.  “So, with that in mind, we’re thrilled to join Craig Jackson and his team on this historic journey to return Little Red to its original glory.  “This will be one of the greatest stories of automotive history ever told, and we look forward to having a role in making it come alive for generations to come.” ‘

With the finding of the Original ‘Hero’ Bullitt car which was then hailed as the ‘Holy Grail’, and now this Shelby prototype also being hailed as another ‘Holy Grail’, what a great year for Mustangs so far.