All Hands On Deck

With the amount of cars we have in the yard at the moment we needed to make some space to get them all in. So Adam decided to leave the offices in the more than capable hands of Morgan while he got down to the yard with the cars for the entire day. Last week we posted about a convertible that had our LED conversion kit fitted on it, while she was waiting for the new hood to arrive,  it was decided that she also needed a gearbox upgrade. As Mustang Maniac are now suppliers and fitters of Gear Vendors Overdrive Units – Yogi got busy under the car.

The Gear Vendors unit is an exceptional piece of kit and Yogi has one on his car for his drag racing, of course the main benefit for us mere mortals, is the top end overdrive to knock huge amounts of revs of the engine at speed, thus increasing mpg and comfort while reducing stress and noise. 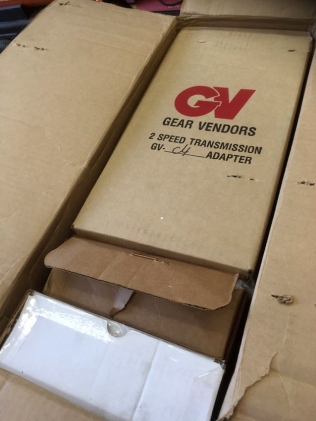 The unit comes with a revised housing for the back of the gearbox and all the electronic wizardry, fittings and pipes you need. The old housing was removed and an inspection while we were at it to make sure all was good in the world of the C4. 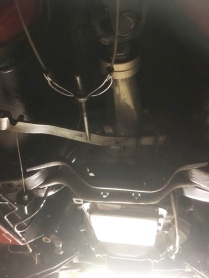 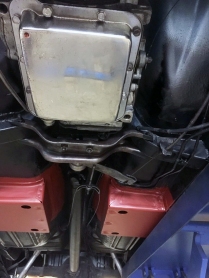 The magic box of tricks that controls the shifts and housing are fitted along with the electrical connections and the pipes. 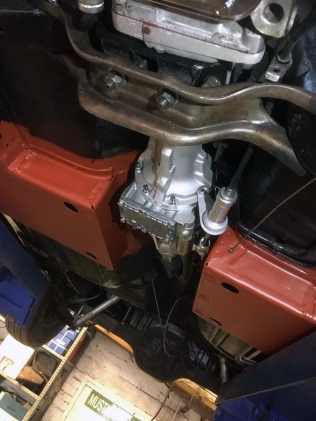 Job done except for the prop shaft to be fitted and checking the software setup. If you want this upgrade email adam@mustangmaniac.co.uk and he will advise you. The additional Borgeson steering upgrade was a straight forward job for Yogi who can do them in his sleep.

The next job was the roof, Paul and Adam got stuck into the job and it’s rumoured that they even missed a tea break, the rest of us are not convinced about that somehow. So we need to know who started such terrible rumours!

While all this was going on a stack of ‘stuff’ appeared in the boys club. So a sneak peek as to what Adam was up to revealed a superb bespoke full leather upholstered seat set. We are not sure where these are going yet, but they will look amazing wherever they are fitted.

Even the door cards are in leather and the matching rear kick panels covered all to match.

Along with the recent order we are pleased to say that we now have the Limited Edition Shelby wheels now in stock. These rims are available in 20″ x 9″ or 20″ x 10″ with the choice of black or chrome!

We have a limited number of these wheel sets at the moment, so if you want a set, hurry up, get your wallet out and order them as these will go!

It’s no secret that Yogi likes a blast down the drag strip, but what if we told you Ford have built a car to beat most drag cars straight out the box? Read this article we found:

The 2018 Mustang Cobra Jet is a limited-edition turnkey race car that honors the 50th anniversary of the original that dominated drag strips in 1968. The new Cobra Jet makes its public debut this weekend at the 2018 Woodward Dream Cruise.

The Ford Performance Parts team developed the 50th Anniversary car to be the most powerful and quickest Mustang Cobra Jet from the factory ever – capable of topping 150 mph while turning in a mid-eight-second quarter-mile run. The project epitomizes the close teamwork between traditional and motorsports engineering groups to maximize the design, performance and durability of production Mustangs.

“From the very first Mustang Cobra Jets dominating the 1968 NHRA Winternationals to our modern-day racers, the Ford Performance Parts team continues to build on Cobra Jet’s success at the track over five decades,” said Eric Cin, global director, Ford Performance Parts. “This has inspired generations of Mustang fans to create their own performance machines for the street.”

The car is powered by a special 5.2-liter version of Ford’s famed 5.0-liter V8, strengthened and outfitted with a 3.0-liter Whipple supercharger. The engine sends power to the ground through a 9-inch solid rear axle, two-way coil-over shocks with adjustable ride height and a low-drag disc brake system from Strange Engineering as well as a four-link rear suspension with antiroll and panhard bars.

The new Mustang Cobra Jet is available in either Race Red or Oxford White and can be outfitted with exclusive 50th Anniversary graphics and badging. Customers can order now at an MSRP of $130,000. Production is limited to 68 cars, in honor of Cobra Jet’s 1968 debut.

The car’s long history of winning and setting records dates to its debut race weekend, where it commanded NHRA Super Stock at the 1968 Winternationals in Pomona, Calif. Since then, its winning engine formula has served to power Ford Mustang, Mercury Cougar, Ford Fairlane, Ford Torino and other vehicles. Credit for this formula goes to legendary East Coast Ford dealer Bob Tasca, grandfather of current Motorcraft/Quick Lane Mustang NHRA Funny Car driver Bob Tasca III and the man who coined the phrase “Win on Sunday, sell on Monday.”

After its display at Mustang Alley as part of the Woodward Dream Cruise, the 50th Anniversary Mustang Cobra Jet will travel the following weekend to Norwalk, Ohio, for the 50th Anniversary Ford Performance Cobra Jet Reunion at Summit Motorsports Park – the largest gathering of Cobra Jets in history. More than 150 vehicles dating back to 1968 are expected to attend. 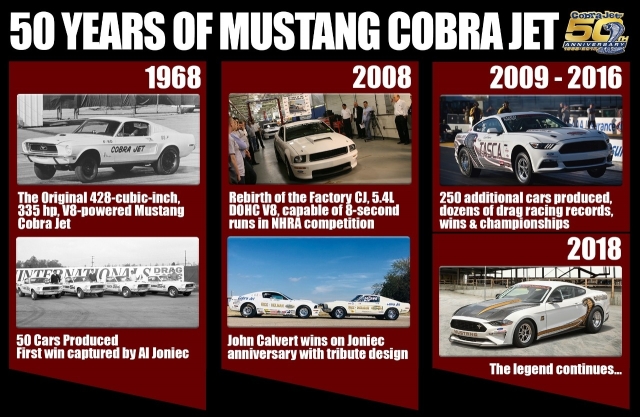 2008 – Rebirth of factory Mustang Cobra Jet, M-FR500-CJ, 40 years later:
·  Powered by a supercharged 5.4-liter dual-overhead-cam V8, this drag racing renaissance was the first Stock Eliminator car to dip into the eight-second zone at an NHRA National Event
·  Unlike the original, the 50 produced this time around do not feature VINs, so they are not street legal
·  John Calvert drives a Cobra Jet featuring Joniec tribute paint scheme to victory at NHRA Winternationals on 41st anniversary of its original win

2009-16 – M-FR500-CJ:
·   250 additional cars are produced with dozens of domestic drag racing records, victories and championships achieved across NHRA, IHRA, NMCA and NMRA
·   Drivers range from experienced veterans to young drag racing stars in the making
·   Through half a century, Mustang Cobra Jet orders are still being placed at local Ford dealerships!

If you feel the need to beat our very own Yogi race car, this may be the option just for you. Yogi has one of the fasted Mustangs out there his response to that article? ‘I built mine myself, Ford works had to build one to be me!’ So he may not have used those exact words, but that was the gist of it! 😉

1 Response to All Hands On Deck