Once in a while at Mustang Maniac we are pleasantly surprised by a car that comes into us for a little work. This week we have seen one of those rare occasions. This car was imported into the UK and was shipped straight to us for a once over, MOT and any little bits work that is needed.

We got this lady up on the ramps and could tell that this was a nice car with some proper money been spent on her. The underside was solid, clean and virtually rust free. There was no visible patches, holes or anything hidden that was going to cause us problems. Suspension parts had been changed, steering converted to a Borgson set up, new springs, disc brake conversion, wheels and tyres to name just some of the replacements.

The car was running, but needs a little Yogi magic and first things first was a service, now that would have been good if we could get oil in the car. Both the valve covers we closed versions and nowhere for the engine to vent or get oil in, so a nice set of chrome valves covers went on and a matching breather cap and pcv valve to the carb. Pertronix ignition was next up and all of a sudden things improved with the engine. We will sort out the timing and fine tuning later after a full diagnostics and road tests.

The rear leaf spring bushes had seen better days and needed a swap out, although they had changed the fronts with a poly set.

We were asked to swap out the rear LEDs for a new set of LEDs all round front and rear. There was nothing wrong with the old set except they were USA reds only. So when the indicators came on the lights flashed red as normal. So a Euro spec was added and the new accompanying wiring fitted to allow for the extra connections.

Both Adam and Yogi were amazed that the original light cluster screws were in place, a very difficult to get hold of part if at all.

A very nice little convertible import and a pleasure to tell the customer all is good with the basic structure of the car.

While we are on the case of LEDs we have another car in for the same thing. These were working at the time we took the pics: The first are of and pic with the park lights now as side lights too.

We had to play around a little with the camera to try to take a pic of the LEDs as they never seem to come out right, so here are the front amber indicators, I think we shown the colours OK. 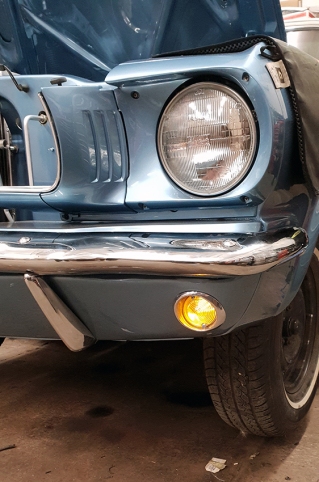 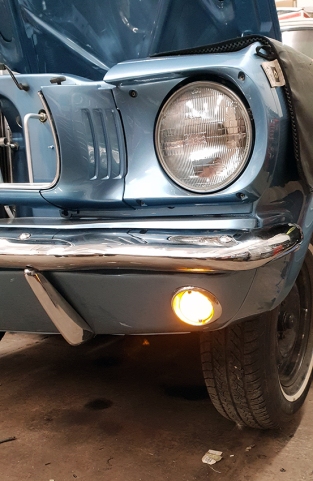 The rears again didn’t come out brilliant on the pics, but they are super bright. Red drive lights and the amber indicators.

Adam has taken another delivery of some more alloy wheels as he has sold the last few sets he had in. If you want some, get in quick before this pallet load gets sold.

We know Adam has a batch of Limited Edition wheels coming in from another container this week, and we are excited about these, watch this space for next weeks post on a few new items just coming in.

DEARBORN, Mich. – Ford is celebrating the production of its 10 millionth Mustang – America’s best-selling sports car of the last 50 years and the world’s best-selling sports car three years straight. The 10 millionth Ford Mustang is a high-tech, 460 horsepower 2019 Wimbledon White GT V8 six-speed manual convertible equipped with the latest driver assist technology and built at Ford’s Flat Rock Assembly Plant in Michigan. The first serialized Mustang (VIN 001) produced in 1964 was the same color and model with a three-speed manual transmission and 164 horsepower V8. “Mustang is the heart and soul of this company and a favorite around the world,” said Jim Farley, president of global markets, Ford Motor Company. “I get the same thrill seeing a Mustang roll down a street in Detroit, London or Beijing that I felt when I bought my first car – a 1966 Mustang coupe that I drove across the country as a teenager. Mustang is a smile-maker in any language.”

Ford is celebrating the milestone with employee celebrations at its Dearborn headquarters and its Flat Rock Assembly Plant, including flyovers from three WWII-era P-51 Mustang fighter planes and Mustangs produced for more than five decades parading from Dearborn to Flat Rock, where the Mustang currently is manufactured. During its 54-year production history, Mustang also was built in San Jose, Calif., Metuchen, N.J., and the original Mustang production facility in Dearborn, Mich.

Mustang is America’s best-selling sports car over the last 50 years, based on Ford analysis of 1966-2018 total U.S. new vehicle cumulative registrations for all sports car segments supplied by IHS Markit.

The Ford Mustang is now in its sixth generation. In addition to its sales leadership, the Mustang page has more likes on Facebook than any other vehicle nameplate.

Here’s to the next 10 Million!