During the week we have been asked what has happened to the Park & Pic posts, so not to disappoint we have one today for you. We have to admit we have been slacking a little in this area as not all the cars are collected from the front of the office, most are picked up from the yard to be fair. So we start with that this week:

This genuine 67 390 GT  is owned by Ross and is a beautiful Concours correct car. 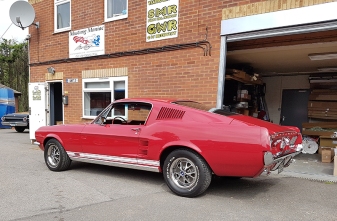 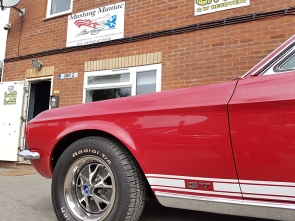 The car was brought to us as she was running a little lumpy at speed so Yogi got to work on it and first things first, the timing. The timing was out enough to cause the problem so that was adjusted to the correct settings. Then Yogi worked his dark art magic on the carb for a tune up which again was running a little rich. Now the engine idled nicely and revved up smoothly. 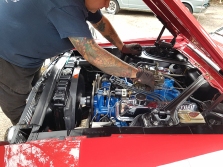 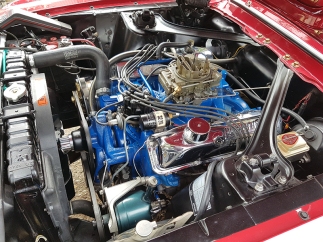 While Yogi was doing what he does best, Ross mentioned that he had visited a show hosted by a well know Mustang Owners Club based here in the UK. He then went on to explain that he was docked a point for an “incorrect HT (spark plug) lead”. Pointed out here by the arrow.

Yogi said this was in fact correct.  Once Adam had finished dealing with customers in the office, the same point was raised again, Adam also confirmed this is absolutely correct and went on to explain why. This was backed up by a Concours Correct part that Adam got from the stores, just to prove the point. Adam also took the inserted label out of the sealed part bag in order to photograph it. 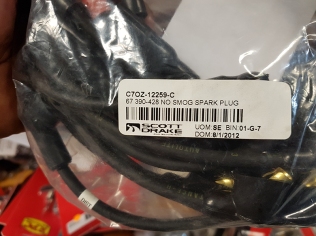 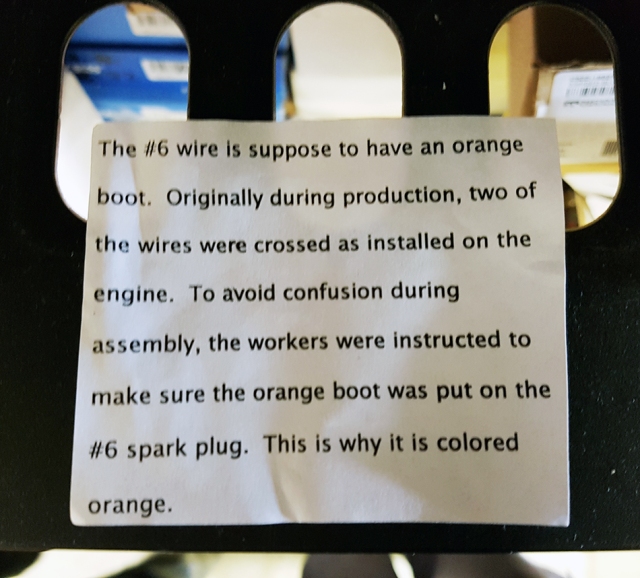 The insert confirms what Adam had just been explaining. “During the production line process a number of engines had a miss fire straight from the line. Ford launched an immediate investigation and it was later found that the workers had swapped the fifth and sixth cylinder leads around the wrong way. Needless to say this caused Ford multiple delays on the production line as well as having to fix the relatively simple error. Like all things, the simple answer was to identify the correct wire. So the Orange boot was created to cure the problem, which it did instantly with the very first cars with the new system rolling of the production line, no more misfires.”

So we have a couple of questions for the judges of the Mustang Owners Club in question. Firstly; how come you didn’t know this fact? Secondly; can Ross have his point back again?

Adam has had a request in to stock a particular brand of oil called “Driven”. Adam investigated and has spoken to them and now is a stockist for their products. Adam has stopped selling the Kroon product now, but still keeping the popular Kendall products. These oils are a premium product and their slightly higher costs reflects that, so if you are running down the Santa Pod quarter-mile or you inadvertently leave some large rubber trails when leaving the lights, these oils will protect your engine, gearbox, brake fluids, break in oils etc. 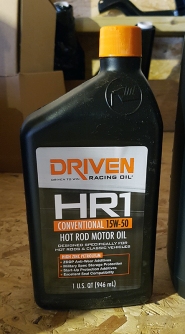 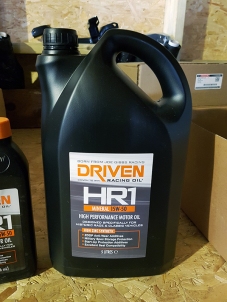 A new line of  wheels for the more “resto mod” look. These Magnums are 17″ x 7 ” or 17″ x 8″ in Satin black. We have already sold a set within the first week and has generated some keen interest. 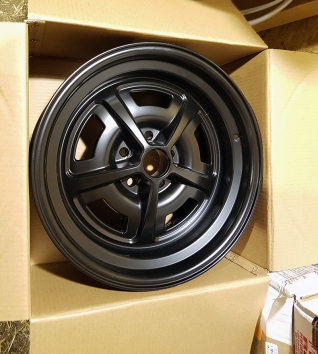 Adam has purchased a huge stock of multiple water pumps, and as far as we know, Mustang Maniac has the only supplies of i6 classic mustang water pumps. The rest of the stock has yet to be bought to the stores and a shelf is expected to go up and hold the additional pumps. 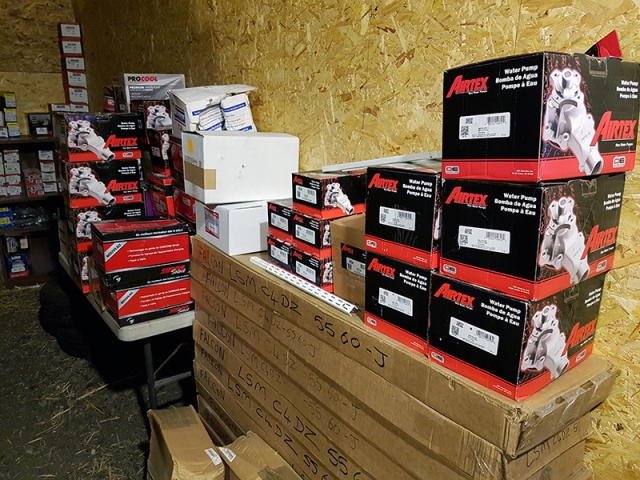 Not to leave out the newer Mustangs, Adam has a new line of roof spoilers for the 2015/16 models. This simple to fit accessory creates a nice finish to the roof lines of the car. This spoiler also shields the high level brake lights from the sun (when we get it in the UK that is), and makes them a more of a contrasted to see.

To finish up with we have a strange title for this post? No not really, about sixteen years ago Adam bought his new Ford truck with the Harley Davidson livery, at the same time there was a strictly limited edition of Harleys made to match the truck. So Adam bought that as well. Since Adam has owned it he has only done one hundred miles on it.To keep it in ind condition he had an idea! 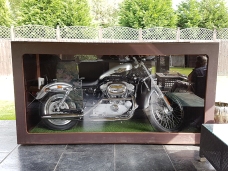 Yep, this is now part of the BBQ chill out area. So, if you’re lucky enough to be at one of Adam’s little curry nights, you too could get to stare at a pristine limited edition Harley. Adam has to finish the case build yet, with the addition of LED lighting and some rather fancy ideas about pop up electric and phone charging points!

Is it just a bloke thing? We could of course be wrong!

5 Responses to It’s A Bloke Thing!