Take To The Floor

This week has been busy for the office with the phone ringing constantly, unfortunately most of the esquires again are around our stock levels. For the people who already know how Mustang Maniac Webshop works as an online part supplier, we can only apologise to bring this up again. We can only keep reiterating that if our WebShop says it’s “Currently in stock” then it certainly in stock there is no need to confirm by calling us. We completed a stock check only a month or so ago and we are fully itemised for accurate stock levels. Our invoice system will update the stock levels are updated instantly as we pick the parts from the shelves. So if the last item is picked before you order the part the it will show as ‘Currently out of stock’ then that item has been sold. Just refresh your browser to double-check before ordering. We hope that can allay your fears so your don’t need to call us and check.

Back to the cars more in particular the “BRC” (Blue Race Car). The car has now had the floor pan replaced, which is a critical part of the car for structure and how the car will eventually go back together again. 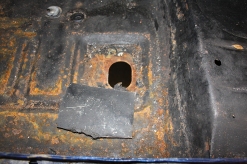 The floor pan was removed and there was a sigh of relief as the main chassis parts were in much better shape than we expected. This will save considerable time to refit the floor pan. The down side is some of the strengthening box sections were rotten and needed to be fabricated back into place. The side sills were in pretty good condition but only needed a little patch here and there certainly nothing much to worry about. 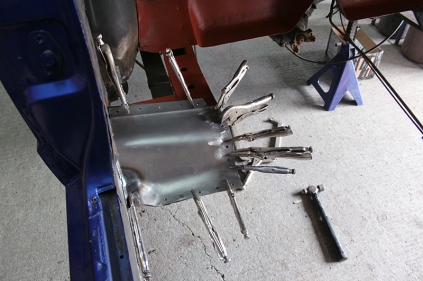 While the floor pan is out the main job is to protect the metal on the chassis, so the red oxide is out and all internal parts are given a good coat for protection. 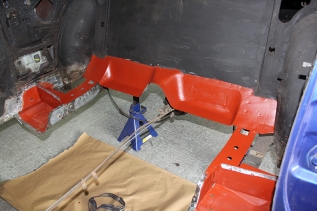 The floor pan itself was the full pan and not the sections in this rebuild case, that means less welds and more cleaner metal all round.

The floor was then treated to yet more red oxide for internal protection. 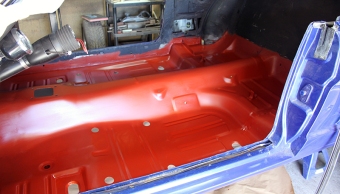 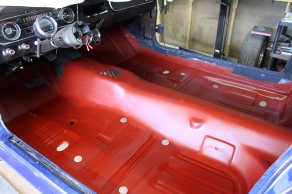 With the pan allowed to dry and cure the seat bases were fitted into place.

With the major panel replaced and the floor coated that’s the main work completed for the middle section regarding the panels of course.

The rear section is the target for the next phase, we suspect there will be a fair amount of work to be done there as well.

Ford has introduced the retro-inspired ‘Pony Package’ for the 2018 Mustang EcoBoost.

The front badge is like the iconic Mustang logo from 50 years ago, surrounded in a chrome corral. The badge design first appeared in the mid-1960s and has appeared in various forms since, last used as part of an anniversary package for 2015.

The 2018 Ford Mustang heads to dealerships this October. Expect pricing for the Pony Package to be announced closer to the sports car’s launch later this year. Mustang Maniac are quite pleased to see the Corral back on the cars again. We have added little article which is on many websites so we thought we could also make it easier to be found here, or see the Articles Menu above.

Ford is building on its rich history of iconic cars and community building as presenting sponsor of the 2017 Woodward Dream Cruise, America’s largest annual celebration of automotive history and culture. 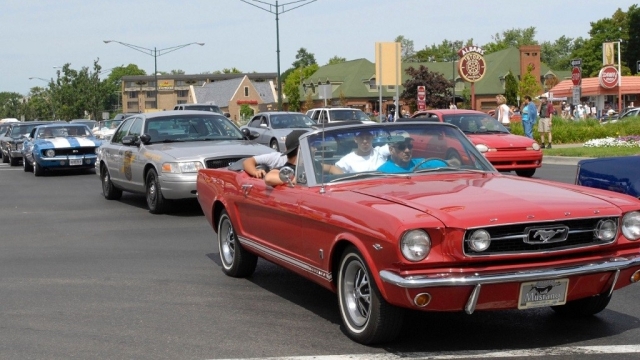 This year’s Woodward Dream Cruise takes place Aug. 19 and is expected to attract more than 1.2 million people and 40,000 cars.

“Dream Cruise is all about the sheer joy and freedom of the automobile, and Ford has always celebrated car culture,” said Mark LaNeve, Ford Vice President, U.S. Marketing Sales and Service. “From Fiesta to GT, we’re obsessed with making driving fun and we’re committed to celebrating that passion with enthusiasts of all ages in the birthplace of motoring.”

In addition to backing the Dream Cruise, Ford is also bringing back Mustang Alley for its 19th year. This year’s Mustang Alley will be the largest ever, featuring even more examples of the iconic muscle car, including the new 2018 Mustang, which hits dealer showrooms later this year. All Mustang owners are welcome to take part in this celebration by registering for Mustang Alley here.

Ford Mustang has long held a special place in the history of American cars and the Woodward Dream Cruise. In 1995, the Dream Cruise’s inaugural year, the top-performing Ford Mustang SVT Cobra R was noteworthy for its 300 horsepower 5.8-liter V8. Today, a 2017 Ford Performance Mustang Shelby® GT350R features 526 horsepower and a 5.2-liter flat plane crank V8 that is both the most power-dense and the most powerful naturally aspirated road-going engine in Ford history.

In addition to the fun-to-drive Ford Mustang GT350 and GT350R, Ford Performance also offers a wide lineup of vehicles to meet almost any budget or terrain, including Fiesta ST, Focus ST, F-150 Raptor and the Ford GT supercar with a top speed of 216 mph – the highest ever for any Ford production vehicle.

The fun of driving can be even more thrilling for first-time drivers. To help newly licensed drivers master their vehicles, Ford is bringing its award-winning Driving Skills For Life program to the Woodward Dream Cruise for the first time. Young enthusiasts and new drivers will get the opportunity to learn safe driving techniques with the help of a new virtual reality app with Ford Driving Skills for Life. The educational experience is being hosted by Ford Motor Company Fund, the philanthropic arm of Ford Motor Company.

“We are elated to have Ford Motor Company’s commitment to the Woodward Dream Cruise, and we look forward to working together on this annual tradition that puts our region in the national and international spotlight,” said Tony Michaels, executive director, Woodward Dream Cruise. “Ford consistently strives to make the Detroit region stronger, and we are incredibly grateful for their partnership.”

Part 2. – More rubber meets the road later this year when Ford expands the availability of electronic line-lock on 2018 Mustang. The track-exclusive feature – previously available only on V8-powered Mustang GT – will be standard on all pony cars, including those equipped with 2.3-liter EcoBoost® engines.

The feature is available with either the 10-speed SelectShift® automatic or six-speed manual transmission.

On models equipped with an available 12-inch, all-digital instrument display, drivers will see an industry-first, video-game-like animation of a spinning alloy wheel kicking up a cloud of smoke to indicate when the electronic line-lock feature is activated.

“Burnouts just never get old, no matter how old you are and how many times you’ve done them,” said Vaughn Gittin Jr., Formula Drift Champion. “Who would have thought that we would see an EcoBoost Mustang producing 15 seconds of fury like this? You’ve got to love these rad things Ford is doing.”

To introduce the new updates to the world, Vaughn randomly recruited pedestrians, (you really to have to watch the video to see the looks on their faces), in Southern California to join him at Irwindale Speedway, where he put them behind the wheel of a new Mustang to lay rubber.

Electronic line-lock is traditionally used by drag racers ahead of the starting line to heat up the tire rubber for improved traction when the start light goes green. The feature leverages state-of-the-art software technology that also allows amateur race car drivers, particularly those competing in bracket racing, to achieve more consistent performance times.

Using steering wheel-mounted thumb switches, a driver toggles through a menu on the instrument cluster to activate electronic line-lock. Once engaged, the system builds pressure on the front brake calipers. Another button press holds the pressure for up to 15 seconds, allowing the driver to hit the throttle and spin the rear wheels while the car stays in place.

“We introduced line-lock on EcoBoost Mustangs because we didn’t want those customers to miss out,” said Mark Schaller, Ford Mustang marketing manager. “The number of people choosing EcoBoost power continues to grow globally, and with the increased torque and new features coming on the new Mustang, customers will not be disappointed.”

Electronic line-lock is one of many changes fans will see when the newest version of the iconic pony car races into showrooms later this year, offering:

We are pleased to see the new functions – only to be used responsibly of course. However, if you have enough power and know what you are doing, you don’t need line lock!  😉

3 Responses to Take To The Floor