We will start straight away with the cars this week and not a single mention of the snow, except we just have to say that the hype wasn’t really worth it in the South East of the UK. We even had one of our guys snowed in, so he says. We need a your opinion on the photographic evidence supplied!

Enough of the weather and on with the cars as promised.

We had some sad news regarding one of our good friend’s car. Now any petrol head will sympathise with this next picture, this is like chipping a chunk of a Ming dynasty vase to antique collector. It was done by just catching the door his bench in the garage by parking a little out of place to where he normally parks. 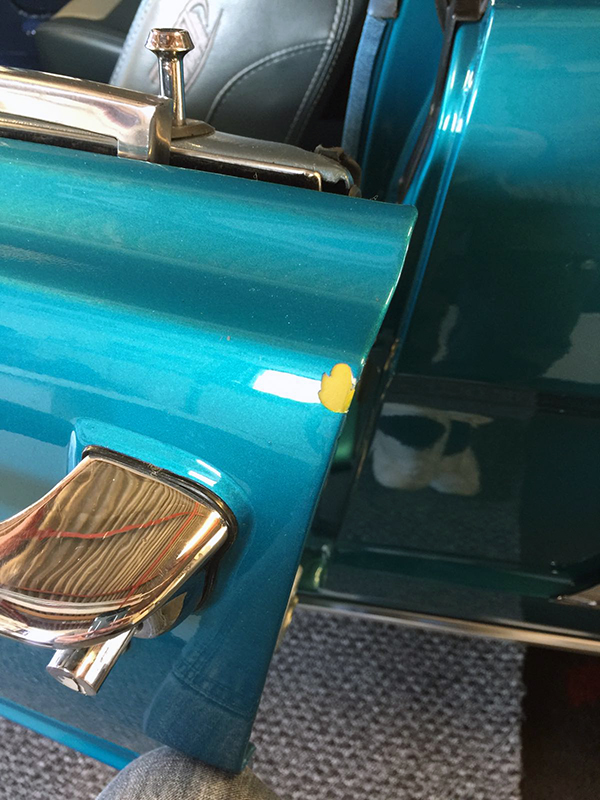 We heard his pained screams from the next village, for any classic car owner this is a major issue. So much so, that trying to correct the problem and then another small problem while he was at it has made matters worse. Yes this can be filled and resprayed, but a difficult decision was made for a new coat of paint, selling a spare kidney to pay for it. The small area on top of the wing was a tiny spot which now looks like a moon crater that now matches the Grand Canyon sized chip on the door paint.

To keep costs reasonable, the owner was to strip the car down, ready for the trip to the paint shop where she would get coats of the same colour. We won’t mention any names of course, but Lance wasn’t happy with some of the other little bits of the body work as it was playing havoc with his OCD, for those reasons he decided to freshen the whole car up again. This all seems a little strange if you ask us, as last year Lance updated the inside of the car with new sound proofing, and red oxide and new custom-made seat covers!

The front left headlight bucket assembly fender extension didn’t fit as well as it could have done, so he got a new one, another good excuse to re-paint the car. 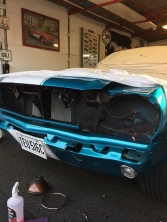 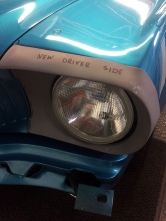 The door cards were to be removed, glass trim, bumpers, along with any window felts, rubber fittings, all so that they could be ready for masking up. A few more areas under the chrome trim needed to be corrected which he wasn’t aware of at the time. The damaged front wing was removed to fix a small hole in the upper cowl which was then red oxide paint to protect it all. 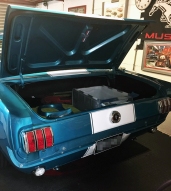 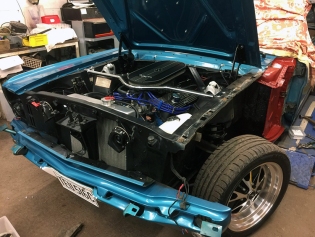 Now that the car is in the body shop, the real nice paint has all but gone.

We shall bring you some more updates as we get the car back, which should be around March time, just in time for car show season. We would like to make a little observation here; we think that this is the first paint job and partial restoration update on a Mustang by stealth. Was the chip an accident??? We’re not so sure now, just saying!

Our very own painter has brought his car back to us after it’s respray. Our task is to put it all back together again. Luckily this wasn’t a full strip down, so it’s case of replacing the damaged or rotten parts, such as the top dash pad etc. to make it road legal again.

A quick refresh of what she did look like:

Yogi and Paul started to put the outside trim back in place . 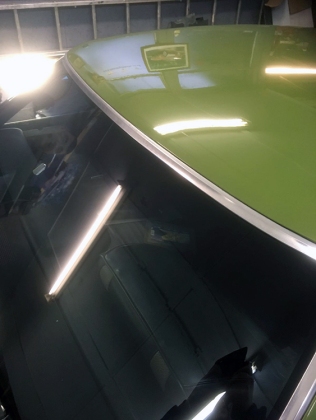 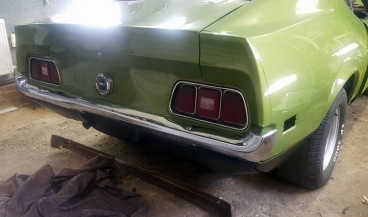 Engine is ready to go back into the engine bay.

Inside the car the dash is the first place to start and soon starts to take shape.

behind the centre dash 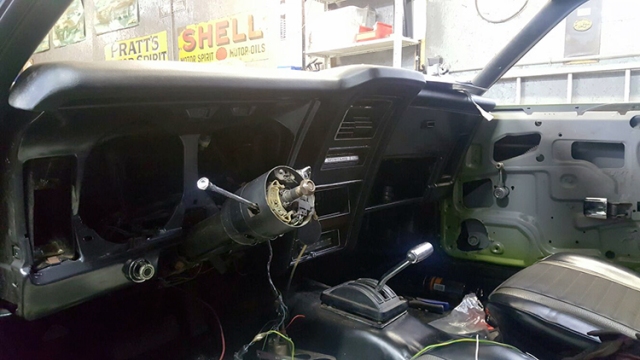 With the main labour intensive part of the dash done it was time for the seats. 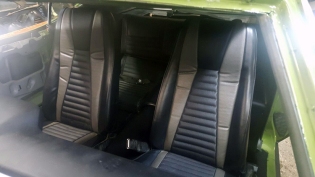 Again we will bring you more on the rebuild of the Mach1 as we go along.

We have a new Limited Edition T-shirt arrived back us. Muscle car owners take pride in the fact they have a powerful cars, for those of us that believe that occasional burn out (in a controlled environment of course), leaving trails of those all important black lines of rubber on the road which goes to prove that point, we have just the T-shirt for you. Mustang Maniac cars and parts are  “Born to Perform”.

A business dedicated to restoration of Classic Mustangs. We supply parts for all ages of Mustangs 1964 to present day, servicing, restoration and custom builds. Anything your Mustang needs, we can help.
View all posts by Mustang Maniac →
This entry was posted in Car Shows, Customers' Cars, Sales, Webshop and tagged gulf stream aqua, Mach1, Mustang, Mustang Maniac, snow, WebShop. Bookmark the permalink.

5 Responses to A Costly Chip