Over the last couple days the weather in the UK has taken a turn for the worse after a very nice hot spell. A thunder-storm has taken its toll on the Mustang Maniac phones due to a bolt of lightning landed in the field behind us on Friday, since then the phones have been down and doing things they really shouldn’t be doing. We managed to get the internet back up and running for the WebShop in order to process the orders and dispatch. We have had a few emails complaining about the fact we are not answering the phones, we are doing everything we can to fix the issue as soon as we can, we have reported the problem and we are expecting the phone system engineers out Monday. As the Mustang Maniac offices have switched over to web-based business model now, this shouldn’t be a problem for parts ordering. The phones should now only be used for booking in jobs to our workshops, which can still also be done via emails.

Over the last month or Mustang Maniac have had a number of cars come into us for some work, but all is not what it seemed. The problem is that due to fact that these cars are commanding good money and that can be exploited. What we have seen is that some of the cars that have been imported into the UK have been advertised as one thing, but the VIN number says something very different. Common examples are the old favorite where a six cylinder has been passed off as a genuine v8. Yes of course the fittings can all be changed over as they should be, but if you are paying top dollar for a Mustang v8, the value will never be what it should be due to its original build history. For obvious reasons we won’t be showing examples of this for customer privacy, and the world doesn’t need to know. We have seen VIN numbers welded in place from other cars, letters stamped incorrectly and whole panels replaced just to get the VIN numbers correct. The visible VIN is different to the hidden VIN or door tag etc.

Adam has said to many people; “If you are importing the car yourself, do you homework first”. ‘Get photos of the VIN numbers and check it out along with the door tags. If the tags don’t match, or you see something different to what the ID tags say, ask questions, lots of questions”.

We are not saying anybody in particular is doing this, it may have even been done by the original vendor in another country and by the time it arrives here it’s all to late. Perhaps the different door tag is down to a replacement door after a minor fender bender, which all would be explained quite happily. On the other hand it could be for more sinister reasons.

Adam has developed an extremely comprehensive VIN and door tag decoder, with many variables that are not on other data bases, just for this reason. If you take your car into Mustang Maniac for any work to be done, if you then ask Adam nicely, he may well print the details of your car out for you.

While we are on the subject of taking people words for it we were told that a gearbox had been “Serviced” recently, but was still not behaving how it should have been. When we took it apart we found out why. The date that was scratched on the Gearbox filter said “24/4/’81”. Another reason not to just take somebody’s word for it. 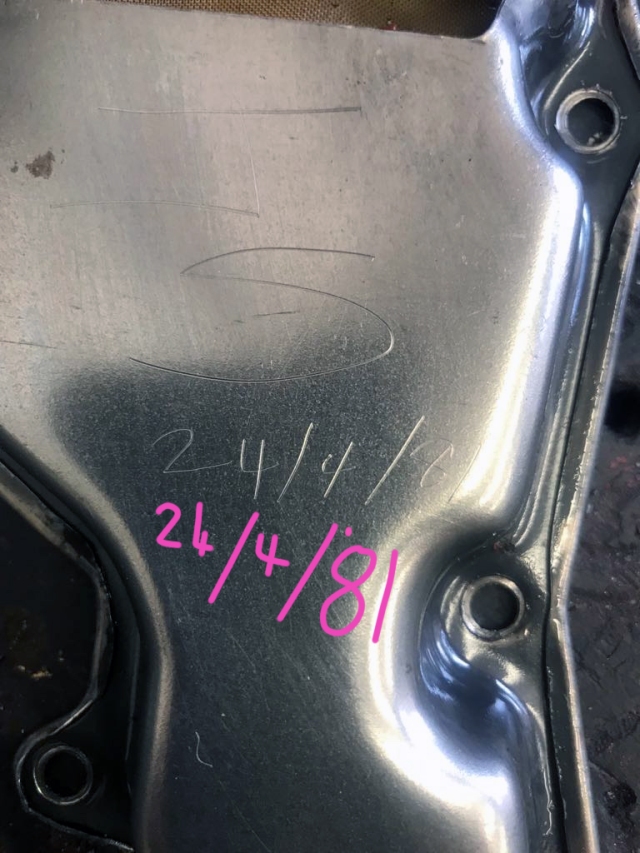 After the proper service from us and adjustments all was working again and performing just how it should do.

In the hot weather we have had a few gaskets blown due to the extra strains on the older and more consumer parts of the car should we say. This car had an unusual intake manifold gasket fail which of course causes some major problems.

Like all these things, if one side has gone do the other side as well as a matter of course. Cleaning the old gasket off and prep work of the metal to metal faces is crucial for a good seal of the gaskets. At least this wasn’t the head gaskets which of course is a much bigger job and more costly.

Last weekend the car show was the ‘Damn Yankees Summer Slam’ held at North Weald Airfield. This is another very well supported car show and the Mustang Maniac “massive” were on convoy to go along and play, of course the only photo’s were taken were of Mustangs! 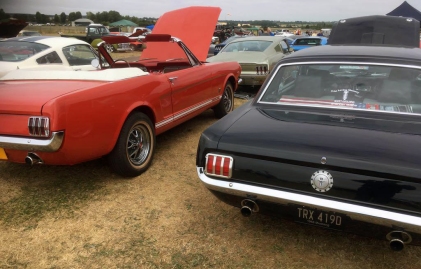 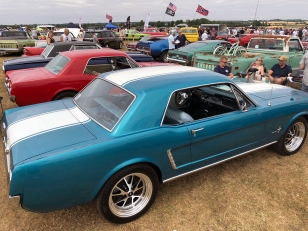 We were told that Yogi was “Chillin'” and we are not quite sure what this hand gesture was all about, at least it wasn’t his normal hand gesturing to other drivers when they drive badly. Not that he bothers with that sort of thing, most of the time he just stamps on the loud pedal and they only get to see his exhaust tips disappearing into the distance.

On the way back from a great turn out at the show, it was decided that as the day was all bout the ‘Americana’ theme we stopped of at a ‘Arnolds diner’, another favourite venue of the Mustang Massive. 😉 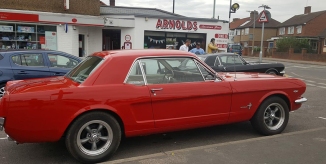 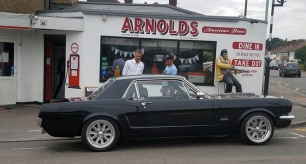 What a great way to end the day. Just in case you thought that was the real Elvis outside the diner, its not. 🙂