In A Galaxie Far Far Away

Well it’s not so far away as you think, it’s Mustang Maniac headquarters actually. Adam has increased his stock levels again, not just in the WebShop we are talking about his expanding fleet of classic cars. Adam owns a fair number of Mustangs, Shelbys, Falcons, Fairlane and now a Galaxie 500!

This new addition is pretty much as it was on the day it was built, apart from the wheels and few under hood tweaks we come to expect these days.

Until you sit inside one of these beasts it’s hard to imagine just how big the car actually is! This is a change from the usual Ford builds as the Galaxie had a full chassis and a body shell that sat on top of it. So under body work can be quite easy to sort out, providing you have the equipment to take the body off. When Adam was asked what are you going to do with it? “I’m not sure yet, but I’m looking forward to doing what ever it is.” The car drives nice and is solid, the engine is fine, but has a misfire when cold, nothing we can’t handle of course. For now this huge car is taking up plenty of space in the shed. 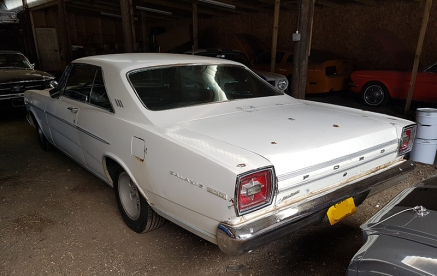 A customer who saw the size of the trunk said, “You could rent that out as a mobile home, or divide it into two and rent out a couple of Semis.”

The interior is fantastic place to be, with a full bench seat that feel like an old friend arm-chair. 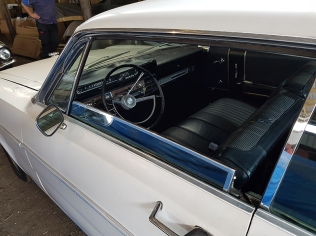 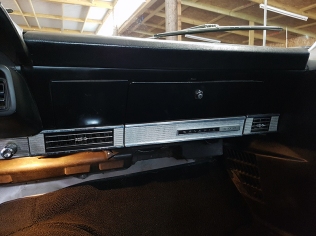 The dash has a light found on some of the Ford models, a “Cold light” to the right of the clock. This was to warn you the engine was (obviously) cold and not up to full operating temperature. Until then they can be a little “grumpy” as they are sometimes referred too. To be honest that goes for most cars.

And the copious spaced engine bay.

The 1965 Galaxie was an all-new design, featuring vertically stacked dual headlights. The cars were taller and bulkier than the previous year’s. The new top-of-the-line designation was the Galaxie 500 LTD. Engine choices were the same as 1964, except for an all-new 240 cu in (3.9 L) six-cylinder engine replacing the 1950s-era 223 “Mileage-Maker” six and the 352 was now equipped with dual exhausts and a four-barrel carburetor.

Suspension on the 1965 models was redesigned. Replacing the former leaf-spring rear suspension was a new three-link system, with coil springs. Interiors featured a new instrument panel and two-way key system were introduced. The introduction of two keys was for valet parking, in that the rounded head key would only open the trunk or locked glove compartment, while the squared head key would unlock the doors and the ignition.

A new model was introduced for 1966; the Galaxie 500 7 Litre, fitted with a new engine, the 345 hp 428 cu in (7.0 L) Thunderbird V8. This engine was also available on the Ford Thunderbird. The police versions received a 360 hp version of the 428 known as the ‘Police Interceptor’ as police cars. The 1966 body style was introduced in Brazil as a 1967 model; it had the same external dimensions throughout its lifetime until Brazilian production ended in 1983. Safety regulations for 1966 required seat belts front and rear on all new cars sold domestically. The Galaxie 500 would be the #3-selling convertible in the U.S. in 1966, with 27,454 sold; it was beaten by the Mustang (at 72,119, by more than 2:1) and by the Impala at 38,000. A parking brake light on the dashboard and an AM/FM radio was optional. The 1966 LTD dropped the Galaxie name.

For 1967, the 7 Litre model no longer carried the Galaxie name; it was to be the last year of it being separately identified. That identification was mainly trim such as horn ring and dashboard markings as well as the “Q” in the Vehicle Identification Number. The 7 Litre for 1967 was a trim and performance option on the Ford XL, which was now a separate model as well. Little else changed, except for trim and the styling; the same engines were available, from the 240 cu. inch six-cylinder to the 428 cu. inch V8. Modifications to the styling included adding a major bend in the center of the grille and making the model less “boxy” than the 1966 model. An 8-track tape cartridge player became an option with the back-up lights being standard.

For 1967 all Fords featured a large, padded hub in the center of the plastic steering wheel, along with an energy-absorbing steering column (introduced late into the 1967 model year), padded interior surfaces, recessed controls on the instrument panel, and front outboard shoulder belt anchors. Another safety related change was the introduction of the dual brake master cylinder used on all subsequent Galaxies (and other Ford models in fact).

The 1968 model had a new grille with headlights arranged horizontally, although the body was essentially the same car from the windshield back. The ‘long hood, short deck’ style with a more upright roofline and a notchback rear was followed too, as was the new trend for concealed headlights on the XL and LTD. One other change for 1968 was that the base V8 engine increased from 289 to 302 cu in (4.9 L). Standard equipment included courtesy lights, a cigarette lighter, a suspended gas pedal, and padded front seat backs. The 1968 models featured additional safety features, including side marker lights and shoulder belts on cars built after December 1, 1967. The 1967 model’s large steering wheel hub was replaced by a soft “bar” spoke that ran though the diameter of the wheel (and like the 1967 style, was used throughout the Ford Motor Company line).

The notorious gangster brothers Ronnie & Reggie Kray from the East End of London during the 60’s, they also used to own a gold coloured 1964 Galaxie 500 as one of their “firm” cars. Oh, when we say “gangsters” we mean genuine gangsters, not boys wearing hoodies with their jeans hanging half way round their thighs, struggling to verbally communicate the use of the English language while “giving it the large” trying to be, what they never will be. (rant over).

A returning visit from a good customer of ours and has won many trophies it her time. She is here for a general service and once over to make sure all is OK, especially on such a rare and genuine car. 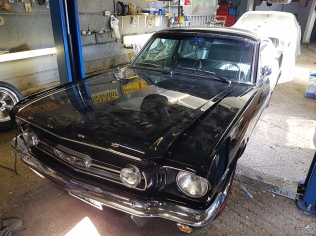 Not only was Adam buying a Galaxie, he bought (another) tool box. Why? It’s fairly obvious why we think. 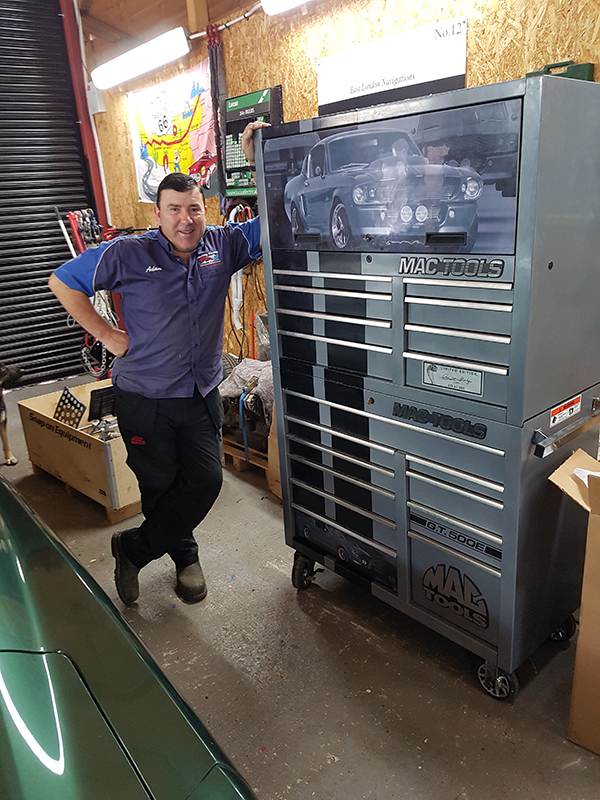 It’s not new, but it’s in great condition as well as a limited edition of 300 signed by the man himself, Carroll Shelby!

This photo here shows that on Thursday we hit a new record!

Yes you really did read that correctly – 400 calls to the office at the time the picture was taken late Thursday afternoon this week. We do admit this is more exceptional than the rule to be fair, so taking that into account we done some maths for you.

400 calls over an 8 hour day that’s 50 calls and hour, almost 1 call a minute. If you take it that most calls last 3 – 4 minutes if your lucky, that would mean we need 3 people in the office just to answer the phones on that day. We wouldn’t mind – but most of the calls recently have been trying to sell us something or, “I bought this from [somewhere else] and I can’t get it to fit – how do I do I fit it?” Now we try to help our genuine customers where we can, but we can’t think of any other service that will support other products for free, especially if they are not purchased from that vendor. The sad thing is a lot of these calls are from people we have never dealt with before and trying to get free support from us.

There is now a new process in the office due to the success of the WebShop business. The orders are processed and packaged in the morning ready for the couriers to pick up the packages just after lunch each day. It’s not until after two in the afternoon that the phones get attended to. In theory there shouldn’t be any calls regarding the stock levels as we keep saying; the WebShop is accurate for stock levels, there is no need to call and check with us, honestly. If it’s a special order we will certainly deal with that for you, again by email is your best bet.

The trouble is that if Adam is answering the phones – there is one person less doing the work on the cars. However, Adam has his phone connected to the network and pics up his emails throughout the day and will respond to you.

We are in the process of holding even more stock now and had to create another storage space, we will bring you photo’s of that next week along with the new large item dispatch area. We have some new wheels in stock and we shall be putting them on the blog next week too.

7 Responses to In A Galaxie Far Far Away