And The Winner Is…

The yard this week has had lots of little maintenance jobs ready for the Car Show season coming up, which starts around the middle of next month, besides we thought Yogi could do with a break from devouring Onions! The colouring in competition closed last weekend and we had some nice pictures emailed to us and it was a difficult decision to pick a winner, but we (Adam actually) eventually did. Before we get to announcing the winner below, we start the post with the lead pictures of the Park & Pic section.

This is owned by a guy simply known as “Hutch” who picked up his ’67 Convertible after a little maintenance. We are pleased to say that this car is used regularly and driven around Europe. It can often be seen sitting on the motorways cruising along exactly as it was designed to do. 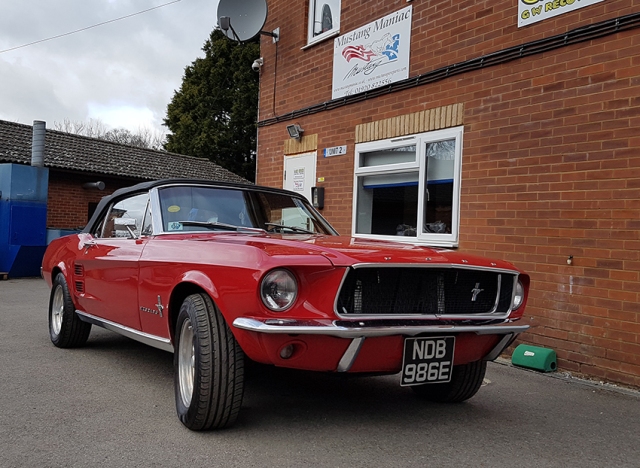 This car really does drive very well and with the nice smooth and straight foreign roads we can imagine it’s a relaxing drive. This little lady has the unusual option boot rack, and it’s not just for show after a shopping trip apparently! 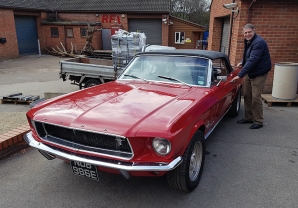 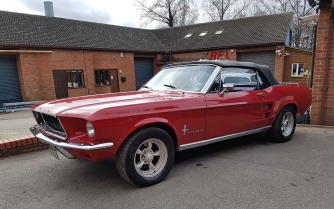 The time has come to reveal the winner of our colouring competition. 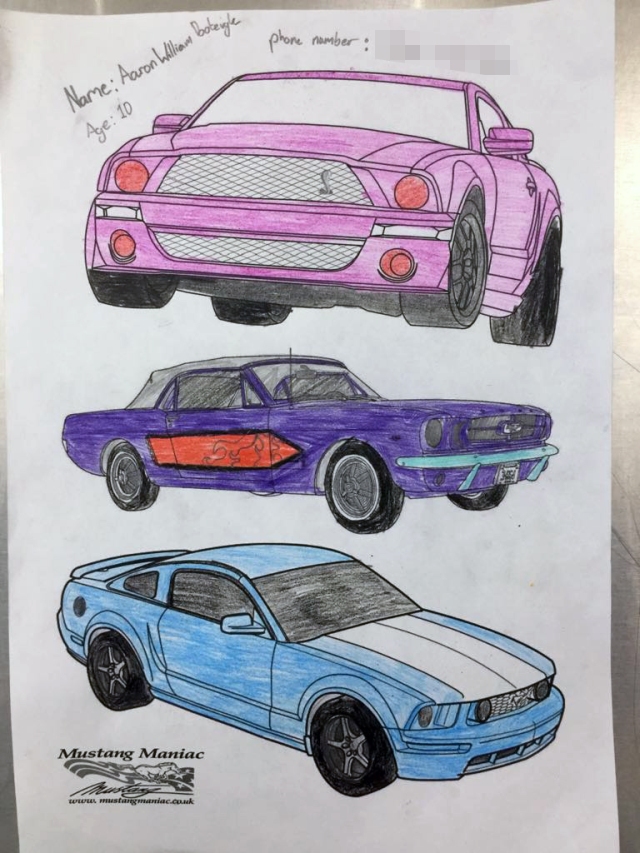 We shall be getting Aaron’s goody bag and vouchers over to him and hopefully get a photo of the winner too if he is up for it.

These runners-up also deserve a mention too; Theo Green Aged 8, Sam Kumari Aged 9 & Kelly Fullerton Aged 4. All of whom will be getting a little something from us too. 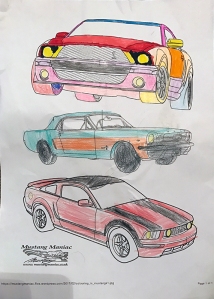 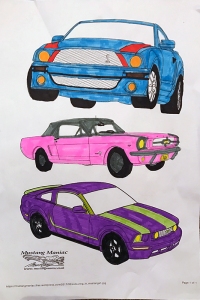 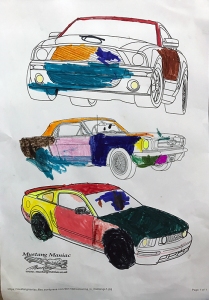 It leaves us to say a big thanks to all those who took time to colour in the drawings and send us in your entries, we appreciate it and hope you enjoyed the fun as much as we did looking at them. Adam has a few paint job ideas now so he tells us.

We have had an email from the odd customer trying to buy something over the phone and not being able to get hold of Adam. Remember you don’t need to call us to make an order, that is what the WebShop is there for. Anyway, the reason is quite simple, Adam has gone back to his roots for a few days. Many people will know that Adam started of in the recovery business, and that is what Adam has been doing this week to help out. As a result he has bought himself a “new toy” as a result. 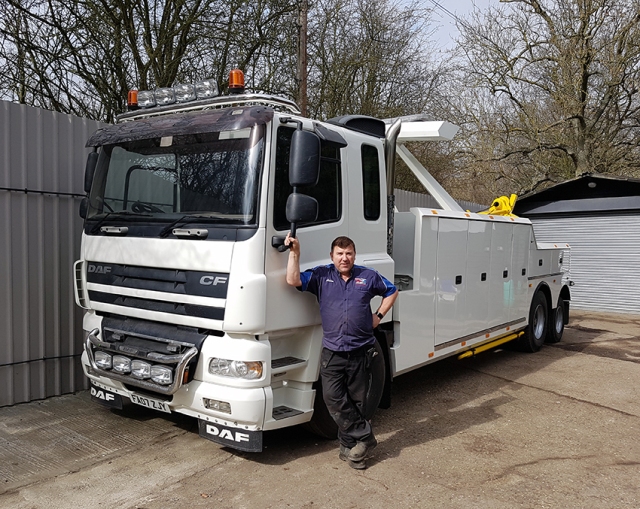 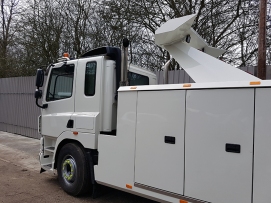 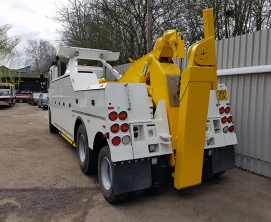 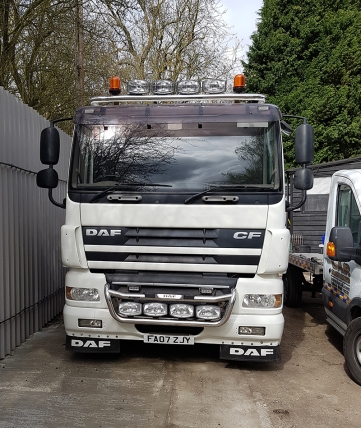 The other additional purchase or “toy” which was “an offer to good to miss”. Another Ford Falcon, but this little lady has had a hard life and was used for racing. Adam’s dilemma is; do I restore it, or have it as a race car and have some fun? Perhaps you could let him know. 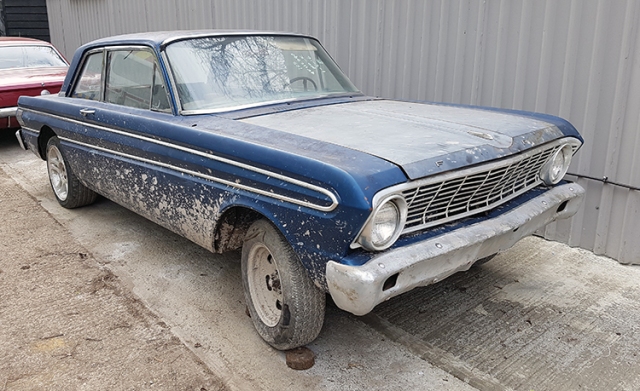 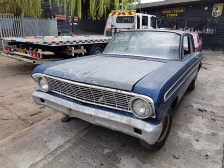 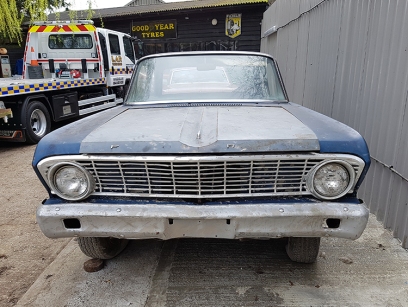 Adam quoted us another of his little mottos: “He who dies with the most toys, wins.” 🙂

Adam is feeling quite pleased with himself as he has just signed a deal to be a UK supplier of an very exciting product for early Mustangs. We are just waiting for the first delivery of the items in early next week, we will let you know all about it in next weeks post with a photo update.

It seems as though We had a long break before our next instalments of the GT500 model, but at least we got them now. 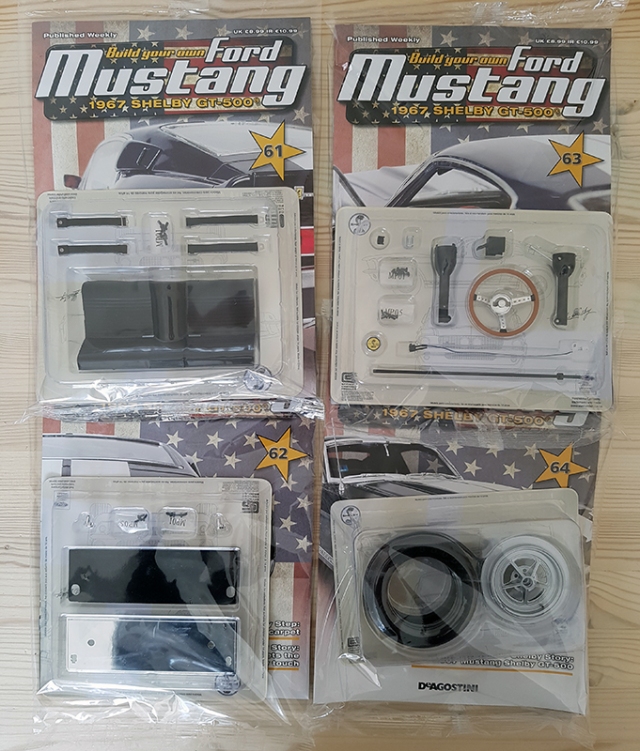 The rear seats and seat belts on this issue. AS per previous issues we are not fond of the way the seat belts pin to the underside. Again we used a little superglue to hold them in place as the little lugs didn’t seem that good. At least it can’t be seen on the underside and just gives a little piece of mind. Just make sure you get the right buckle and clips around the right way. 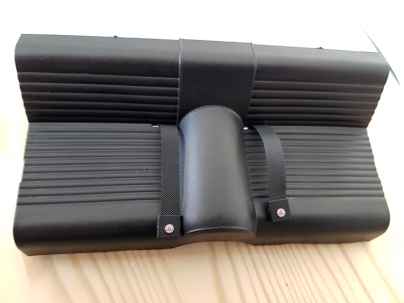 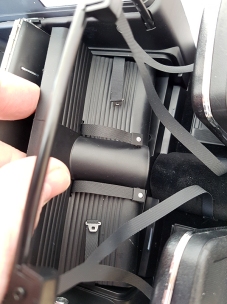 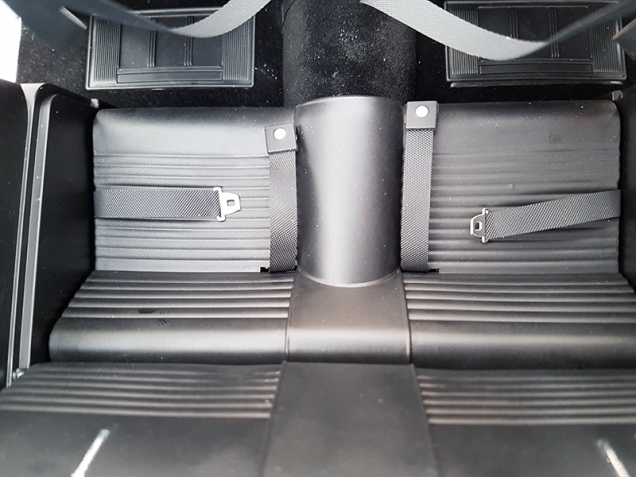 Place the seat into the back and screw into place.

The rear carpet section is in two halves and clips together. Place into the back and two screws behind will hold it in place. Next are the two little clips for each corner, again held in place by smaller screws. 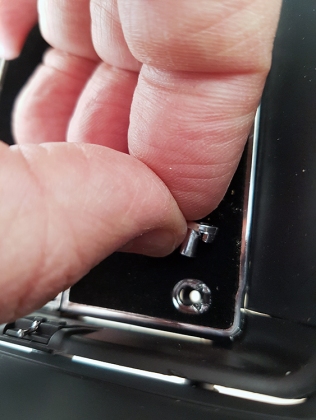 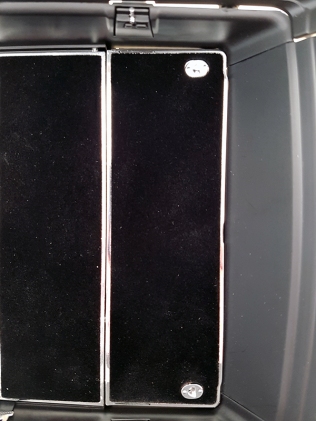 We were quite excited about this issue as we see the steering wheel for the first time. This has the wired horn section and the bottom of the steering rack to be fitted. 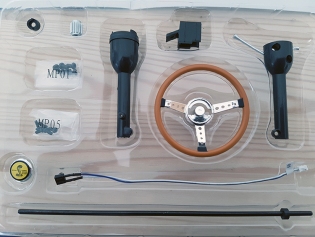 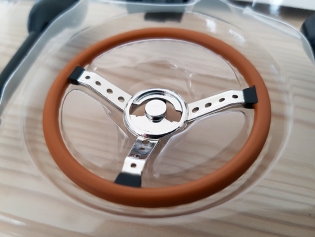 The bottom cog is tight to the steering column shaft and needs to be tapped fully home. 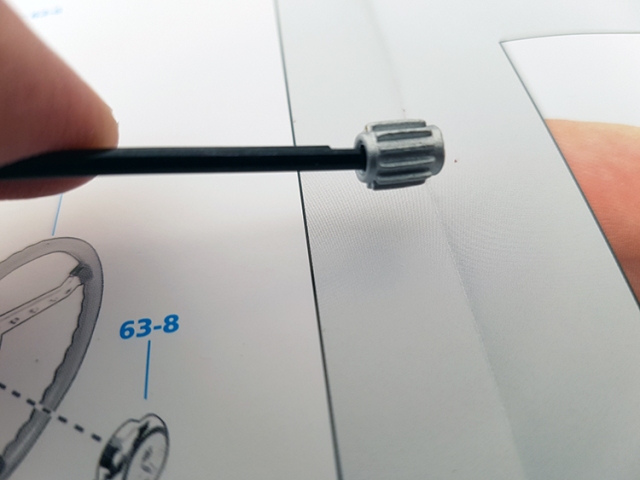 The top of the steering column is in two halves the bottom half will hold the micro switch for the button. It took a little bending of the wires to make it sit correctly. 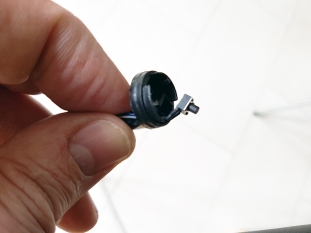 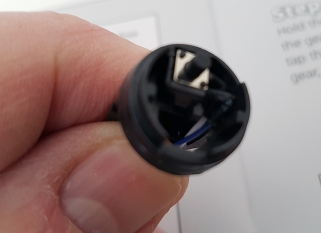 The top cover of the section steering column is three screws to hold it in place. The steering wheel itself just pushes of the other end of the shaft, with the horn button clipping into place. 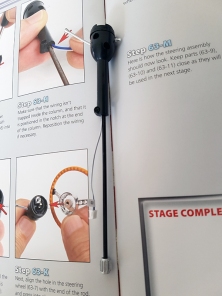 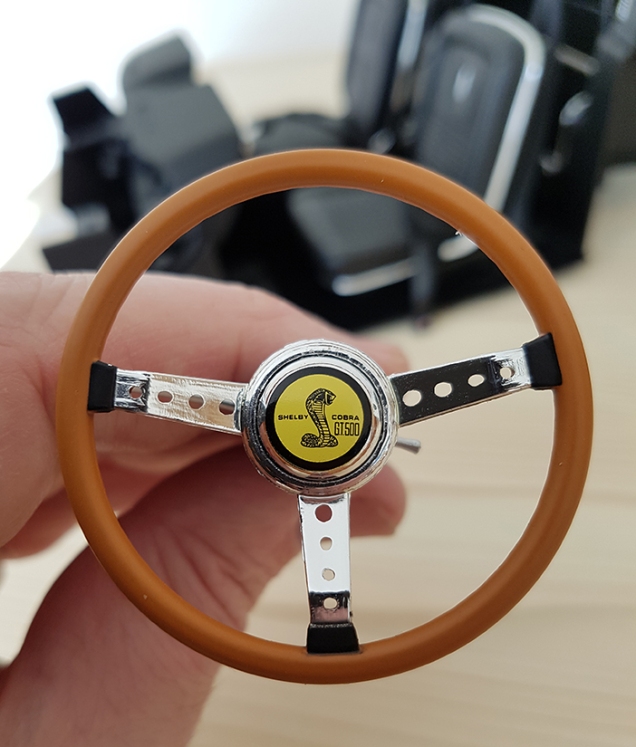 We found the steering wheel does not sit perfectly square and with a little pulling will come straight back off the shaft. We would like to have seen a support screw in the middle here of some sort to be honest. Perhaps a little super glue later on? The quality of the steering wheel is very nice though. There are a few parts left over from this issue so keep them safe as they will be used later apparently. It looks like the steering column support bracket and bottom grommet to us.

Dead simple this as we have done it before, the spare wheel. Two parts only pressed into each other. 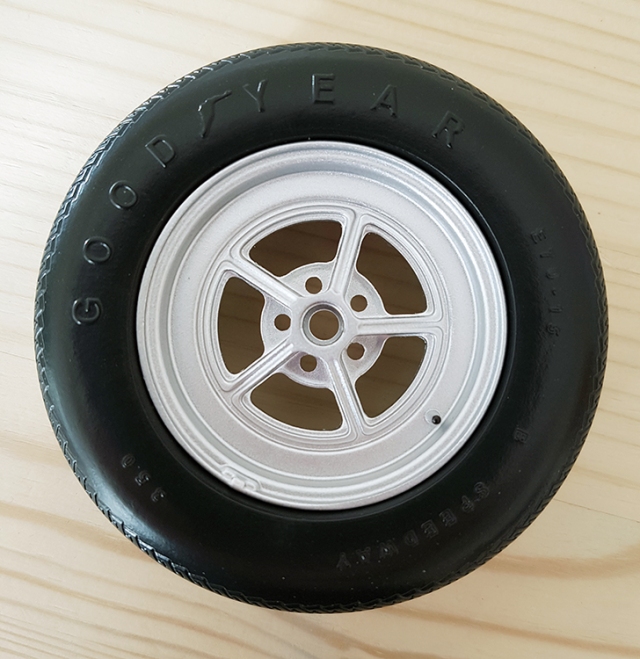 Adam has a very interesting idea or proposition for his back fence. We will tell you about it next week, you could even benefit from it! We finish with a face that says it all – We have a Cadillac waiting for you Yogi!

A business dedicated to restoration of Classic Mustangs. We supply parts for all ages of Mustangs 1964 to present day, servicing, restoration and custom builds. Anything your Mustang needs, we can help.
View all posts by Mustang Maniac →
This entry was posted in Park & Pic, Parts, Webshop and tagged 1:8th Scale, Cadilac, colouring in, DeAgostini, Falcon, gt500, Mustang, Mustang Maniac, Park & Pic, recovery, truck, Yogi. Bookmark the permalink.

14 Responses to And The Winner Is…