We decided that this week was going to rearrange some cars in Adams refurbished storage shed. The racking was used at another location and has been brought to the yard. the old storage was moved out and the racks put back in place. The cars were allocated their positions for now just to get them out of the elements and back into storage.

We decided to help Chris out with his car to move that in from the elements too and move the car and the rotisserie into the storage shed so it can be worked on out of the rain. Adam mentioned that was all going to go in one go Chris thought he was joking! 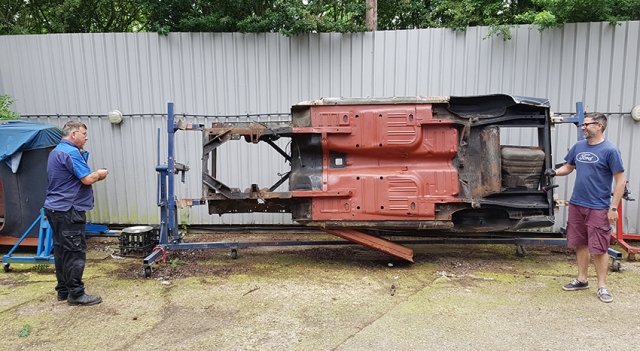 But the lorry was bought round and the process to carefully move the car started. The car and rotisserie were carefully pulled onto the back of the truck and driven round to the shed. Chris was happier, perhaps it was relief to see the car back on solid ground again. He didn’t need to worry, we have done this all before. 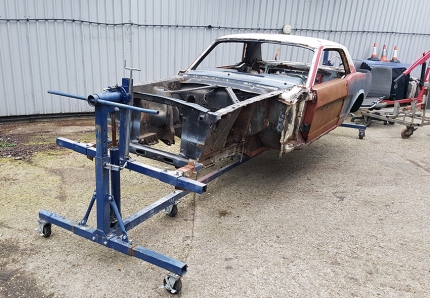 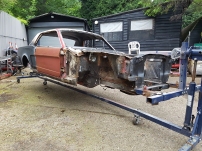 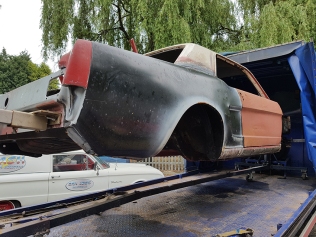 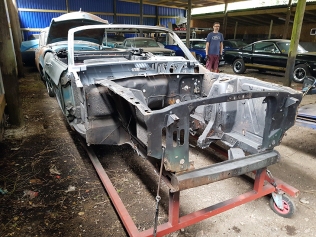 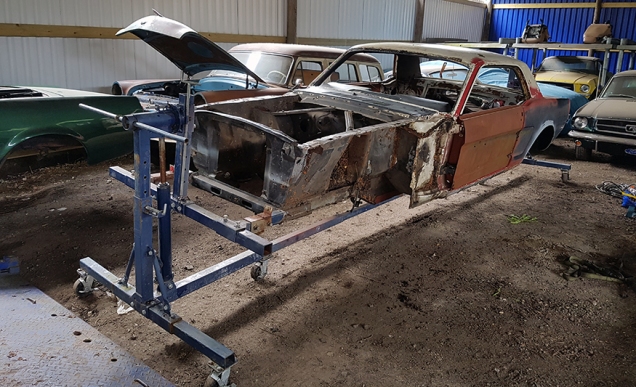 The next victim awaits her turn to go into the panel shop, but that won’t be for a while yet. 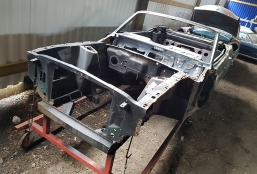 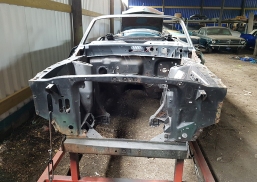 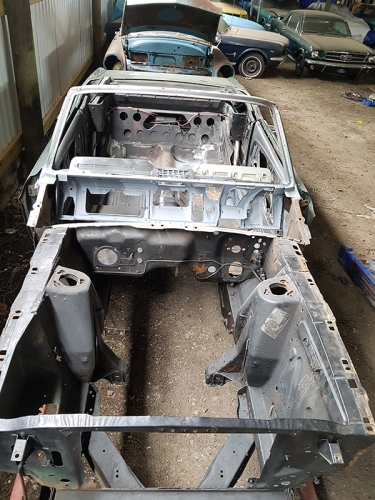 The car has had its final welding to the rear section and sits on her own chassis now. Yogi then got to work and decided to rip the front of the car off. 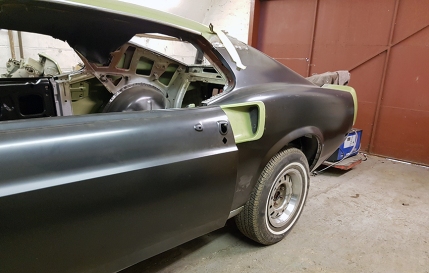 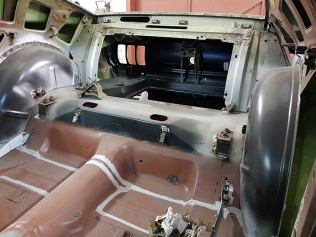 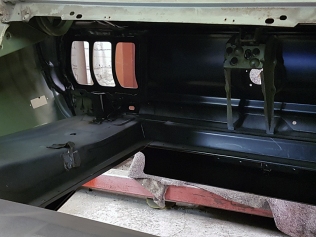 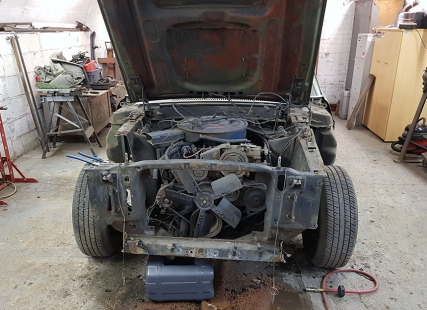 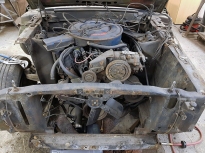 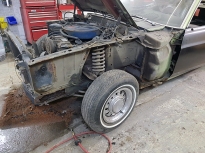 We had a Mustang in that had a self fitted Borgeson steering conversion. The problem was it was leaking fluid and badly but we could find the exact spot. We checked all the seals and pipe fittings and all was in place until we spotted that the Rag Joint was not fitted. Without this flexing joint it causes stress on the main shaft and fractured the metal. From the main pic you can just about make out the hairline crack on the shaft. For steering this is critical and would potentially cause an accident. The shaft is filled with fluid under pressure, we connected it back up just to show you what was happening inside the fittings. 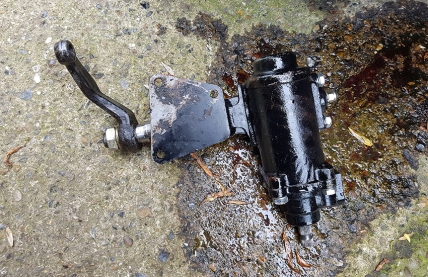 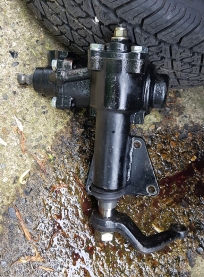 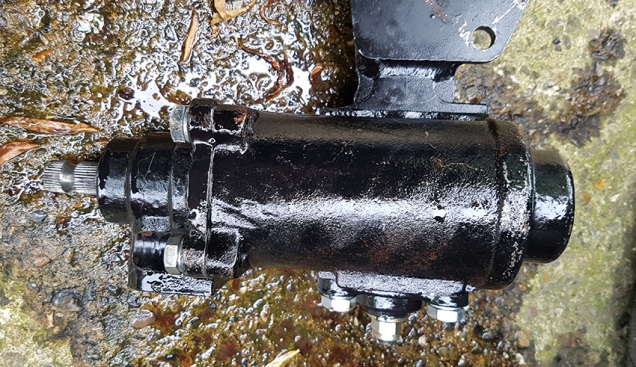 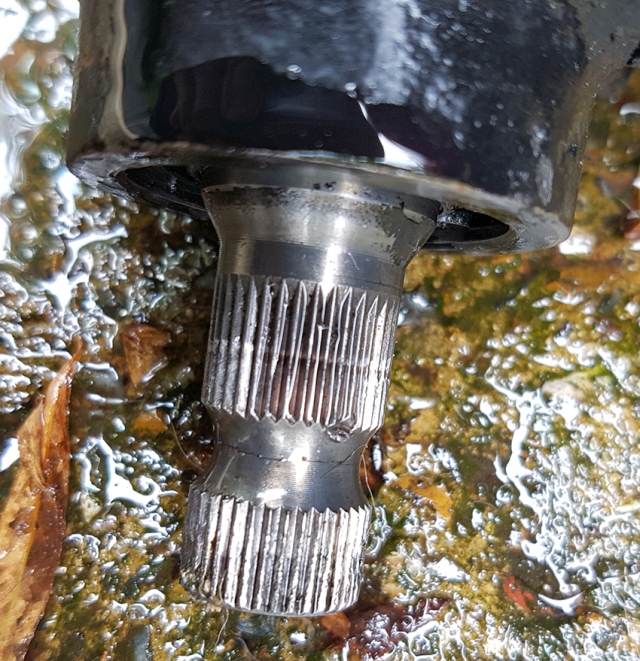 The video here is a only a few seconds long, but you get the idea.

Ford does it again, win at Le Mans 50 years later

Exactly 50 years ago this week Ford shook the European racing world, upending Ferrari’s dominance at the 24 Hours of Le Mans. Ford didn’t just win the world’s most prestigious endurance race in 1966, the company swept it, taking 1st, 2nd and 3rd place in a photo finish that remains one of the most vivid images in the history of competitive Motorsports. 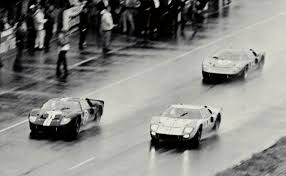 Now, five decades later, Ford is back in full factory force, campaigning four Ford GTs (numbers 66, 67, 68 and 69) that share quite a bit with a limited production street machine that select buyers will start being receiving in late 2016, the new GT – powered by the same engine as in the 2015 Mustang. The potential for the race and street car to again be associated with winning Le Mans was almost too much to hope for given this is Ford’s first year back since 1967 (the company won that year, too, and also in ’68 and ’69, but those last two wins were privately campaigned GT40s with no factory support). The last time Ford competed at Le Mans it took three years for the automaker to win, after disappointing results in 1964 and 1965. But the Fords went on to qualify 1st, 2nd, 4th & fifth. The number 68 Ford Chip Ganassi Team USA GT earned pole position with the fastest time in the LM GTE Pro Class, besting the competition from Aston Martin, Chevrolet, Ferrari and Porsche. In fact, the GT’s lap times were so good race organisers penalised the cars with 22 pounds of extra weight for the race, plus a restriction to their turbo boost pressure. Race officials also allowed the Aston Martin and Chevrolet Corvette teams to increase their performance after seeing the qualifying lap times. A penalty on the Ferrari for showing the wrong position number on the digital display on the side of the car too. The same penalty the Ford suffered (and was penalised for) the night before. Like all European racing the finishing order isn’t always as it first appears (again, just like in 1966). But, as of this preparing this blog there’s no conclusion as to where the Ferrari will finish in relation to the Fords. But it’s possible that Ford could get their fabled 1-2-3 finish, again.

The 2016 24 Hours of Le Mans probably won’t go down in history as the race’s most exciting start. A downpour just before the flag dropped had the cars starting under caution behind the safety car, though within an hour the track dried and the field ran at full power. The Ford GTs, even with their additional weight penalties and reduced boost were looking good, battling with the Ferrari 488s and Porsche 911s for lead position (except for the 67 car, which had transmission problems just before the race began and ended up over 20 laps behind the others).

Six hours later the story was much the same, with the 66, 68 and 69 cars oscillating between first, second and third place in their class, with only the number 82 Ferrari 488 keeping it interesting. The twin-turbocharged 3.5-liter V6 in the GTs emits quite a distinctive exhaust note as they travel past the stands on the pit straight. It’s not as throaty as the V8-powered Corvette, but also not as whiny as the Ferrari’s V8s and the Porsche’s flat 6s. By midnight, 9 hours after the race started, the number 82 Ferrari is leading the 68 Ford GT, with GT number 69 about a lap back and GT numbers 66 and 67 well off the lead. 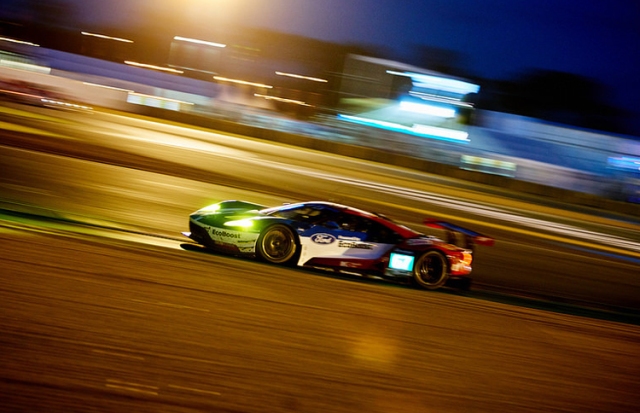 The pattern of the 68 Ford GT staying within a minute or less of the 82 Ferrari remained consistent throughout the night and morning. In the middle of the night there was a penalty assessed against the number 68 GT for not displaying the right position number on the car, but the effect of the penalty was made up by the Ford’s performance in short order. Then, at exactly 10:30 a.m., Joey Hand takes the 68 Ford GT past the Ferrari on the Mulsanne Straight and holds its lead through the chicane and front straight, much to the delight of the Ford fans. That was the last lead change for the LM GTE Pro Class. The 68 car remained in front for the rest of the race, with the 69 and 67 car slowly gaining ground on the Ferrari, placing the Fords in 1, 3 and 4 place. Of course the win is great, but there’s no denying how close to a 1-2-3 finish Ford came, exactly 50 years after the first one. 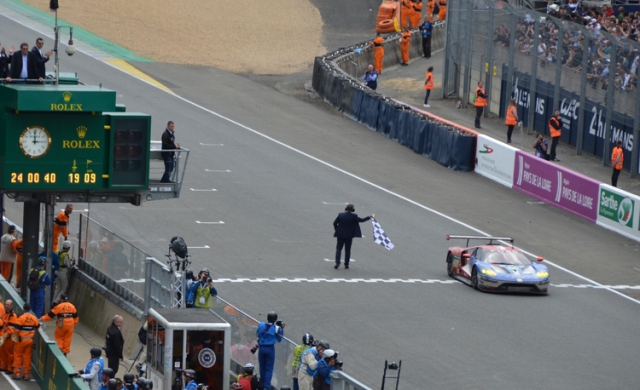 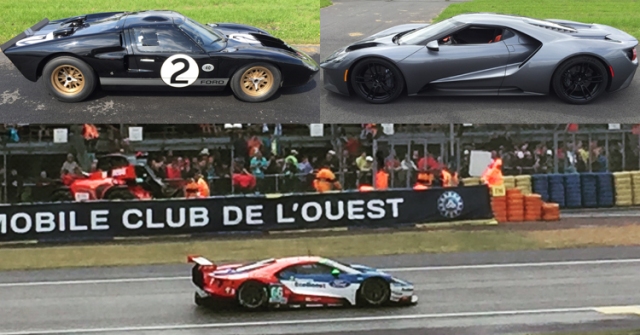 Henry Ford was great friends with Thomas Edison – who is famous for inventing the long life light bulb. In fact he invented many more things like the phonograph, the movie camera and the sound movie camera (although he preferred silent movies as he was stone deaf).

Henry used to work for Edison in the early years and was greatly encouraged by him to continue his work on the automobile. As a reward for this valuable support, Henry always gave Thomas Edison the first automobile from each new run of production – a Model T, Model A etc ……and a top of the range Lincoln. While Edison preferred to use the Model T throughout his later years, Mrs Edison preferred to be ‘driven in the Lincoln’.

Henry bought a winter house next to the Edison’s home in Ford Myers Florida so they could share each other’s company and ideas while escaping from the cold Detroit winters. After Edison’s death, Henry never went back to his winter house.

Ford still owns a number of apartments in Florida – used by engineers on vehicle testing assignments – not being able to test during the cold Detroit winter months these apartments save cost over hotel accommodation. The apartments are available to Ford employees and their families to rent during the summer months when no Florida testing takes place.

What’s the connection between Henry Ford and heart transplants?

Henry Ford was great friends with Charles Lindbergh the world-famous aviator and engineer (Henry only ever flew once and Lindbergh was at the controls). so what, you might say? Henry helped Lindbergh in a number of ways through money, sponsorship and other support and also by giving him a new car and caravan to find peace in the countryside when the pressures of the media got to him after his solo Atlantic flight. So what, you say (again)?

Lindbergh was lifetime friends with Alexis Carrel – an eminent French surgeon and medical pioneer (he provided Lindbergh with sanctuary in France when he was mobbed by the media on landing in the Spirit of St Louis). Carrel was struggling to find a way of conducting open heart and other organ surgery due to blood clotting the pump used to by-pass the organ. Lindbergh stepped in and invented, developed and produced a ‘glass’ pump which completely solved the problem of clotting.

Carrel went on to develop life saving procedures for suturing arteries and also pioneered the treatment of open and infected war wounds – saving many lives in both world wars and beyond.

Lindbergh had a troubled life, his oldest son being kidnapped and murdered, he fell out with President Roosevelt over the Second World War and was plagued by the media his whole life.

The car and caravan given to Lindbergh now resides in the Henry Ford Museum along with a replica of the Spirit of St Louis aircraft. The original aircraft is in the Smithsonian Museum.

We will be doing a post on the car that started the whole Mustang Maniac empire. The Car is Adam’s dad’s car, other wise known as Enos 2!!

2 Responses to Racking and Racing

Leave a Reply to One man and his Mustang Cancel reply