Most of this week has been around small changes here and there, but they all make a difference. Like all these things a small change can lead on to other bigger changes. Some you are expecting, others you don’t. A varied week for us with everything from getting a paint brush out, to gassing cars and we don’t mean with gasoline! We tend to do that quite a lot with the cars already believe it or not. 🙂

The first job was a change to some Aircon gas, we do this for our own LAR and SMR trucks not so much on cars. This nice Oldsmobile was booked into us for a little work and we were asked about the aircon. Normally we would decline for older cars, but as this car had been converted to a modern system so it was a simple job. A little early for a chilly cooling system though? 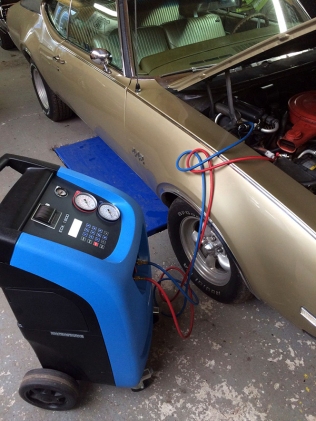 Next up we were asked to replace some HT leads, exhaust system and a carb. OK, not so much little job the exhaust, but we could see why they wanted them changed as they were a little weathered and dented in places. 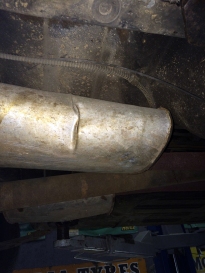 The fuel and brake lines will also be replaced  as they are not what we call safe, but we will be much happier when they will be replaced away from the hot exhausts and secured properly.

With the exhausts off and out-of-the-way we will be replacing the gear box to take an AOD version. The OverDrive makes a big difference for cruising and fuel consumption.

The top side of the car was the place we started to make sure the engine was OK first. We were asked to swap the HT leads for a nice performance set and a bigger Holley carburetor, and air intake. 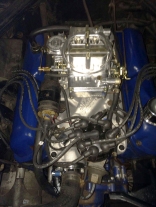 The smaller panels returned back from shot blasting towards the end of the week and will be treated before being bolted and welded back into place. The rear axle has seen some factory style painting going on. The axle stands doing exatly what they were designed to do, but without the car bolted to the axle that is. 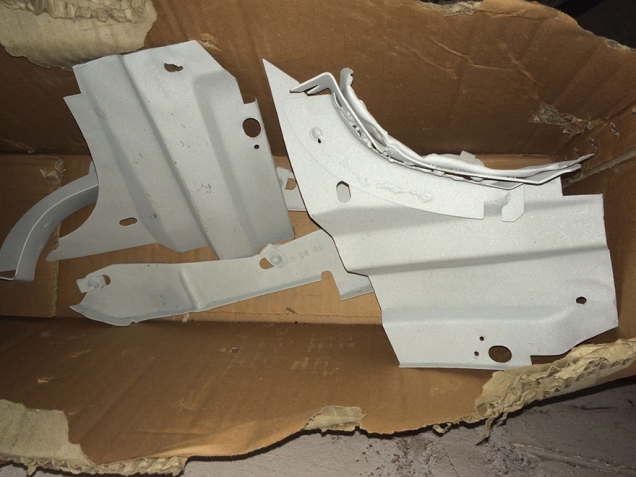 As soon as a car sees a little paint it looks so different and all of a sudden the car is moving on.

We have moved onto to creating the new arches on the car where we managed to save the old metal which we were quite pleased about considering the amount of rust that was here previously. The Yogi polished his claws and showed of his fabrication skills again. 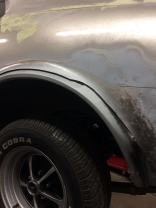 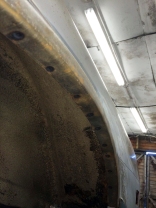 Then the outer side welding up and grinding back to get ready for the filler. 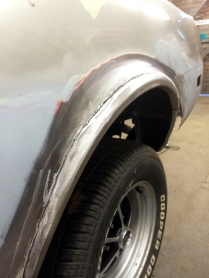 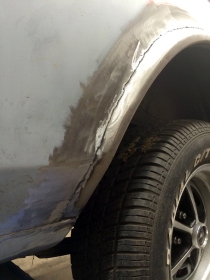 Last week we posted our model and asked for some details and we have been sent a picture of what it should look like. It seems as though somebody has had our engine too. 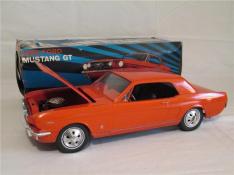 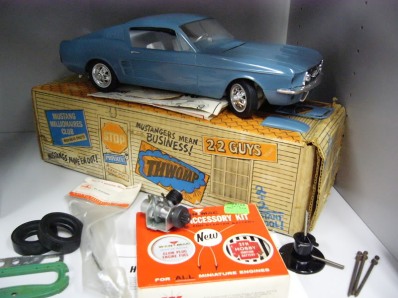 Models from Ford; A History Lesson

Continuing on the ‘model’ theme, back in the late fifties/early sixties, when Ford of Britain wanted to introduce a new model, they had to gain approval from Henry Ford 2 and the Ford board in Detroit. Henry Ford insisted on seeing ‘actual prototypes’ or ‘detailed models’ rather than simple drawings or design visuals. Without today’s modern CAD or virtual reality images sent via the Internet, Henry either had to come to Europe or models needed to be created, packaged up and sent on the company plane to Detroit for his review prior to him approving the significant funds to put the car into production. Ford had a team of highly skilled ‘model makers’ who would produce detailed models of every proposed new car or commercial vehicle – down to the last detail, and also make padded/fitted travel cases for each model in mahogany with brass fittings enabling the valuable models to be transported safely. All the models were hand-made in a mix of metal, plastic, chromed brass and glass. Each was an ‘exact copy’ of the full-sized vehicle and only one was built with the significant cost of each model being no object. The final models to be used for programme approval were the Mk1 Escort and Mk3/4 Zephyr Zodiac introduced in the late 60s. Consider this…the historical Ford Escort was approved for production by Henry Ford 2 using the model shown …. here is where it all started!

Over the passing years, these models seemed to ‘disappear’ until a few years ago, a number of specially made travel cases were ‘found’ covered in dust in a corner of one of Ford’s storage sites. Each case was cleaned and carefully unpacked to reveal these rare design models – still in perfect condition. Needless to say, they are now kept securely in the Ford Motor Company archive facility, not only are they extremely valuable but one offers a real look back in time. If one didn’t know they were models each could be mistaken for a real full size car!

Thanks To Gary for the details.

Not to be outdone with all the talk of rare Mustangs, Adam decided that he was going to buy another Shelby Mustang!

Last but not least, some of our orders have had a little free gift with them. Nothing spectaular, but we are pleased with them. Our new corporate pens that have a very fine writing tip and a smart rubber tip for navigating around smart phones and tablets. If you are around in the offices ask for a pen if you want one. Limited stocks so be quick, not many left in the boxes now.