Don’t take their word for it!

This week has been mainly focused on diagnostics of problems. Yogi is still on his well-earned break in a cave somewhere in Canada. Adam has some new stock and has had to make space for all those parts now too. So without wasting any more time let’s get to the first issue.

A car had been brought into us to be put back on the road after it had been standing for twenty-five years! The guy who sold it told our customer that the Engine was fine and managed to fire it up for a minute or so then switched it off. the gearbox and the rear axle were both fine. What happened we put the car back together on the instructions of the customer. After a couple of hundred miles of the restored car the rear axle seized and needed replacing. The gearbox is difficult for third and fourth gears and just about usable once you get the “knack” of it. and the most recent issue,  big over heating problems. To work out the problem with the engine was a bit of a mystery. The new aluminium radiator was flushed out and some muddy residue was seen at the drain point. Water pressure test was done and found the flow was not consistent across the radiator itself. The problem was still there. So we had not other choice to check the waterways and took the heads of to see exactly what was going on. We soon found the problem: 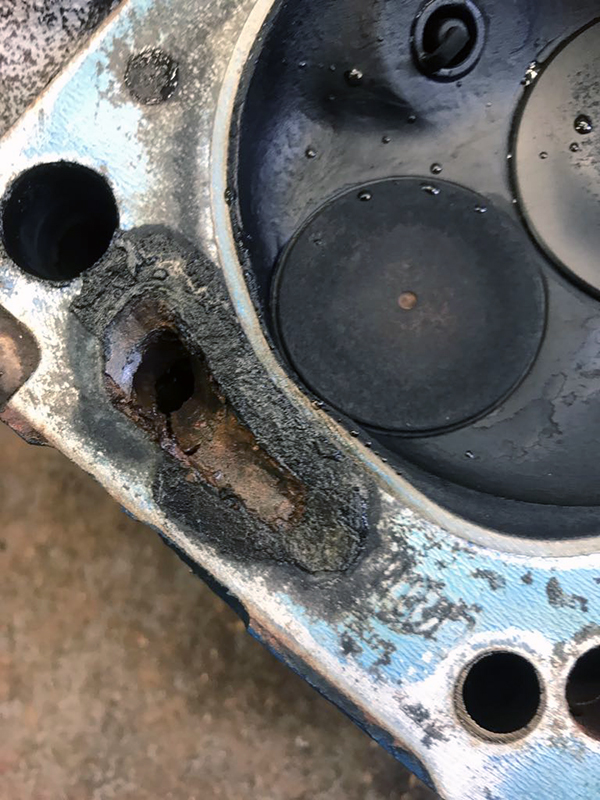 Blocked water ways was the cause. We had to clean them up and reconditioned them.

We even took a quick video of the blocked waterways both on the block and the heads, in fact it was one of the worst we have seen. the video is only a few seconds long but you get the idea.

We managed to clean and flush the block out – with Adams own secret concoction. The radiator was re-plumbed and filled back up with water and flushed again. After all that – the car runs smoother, and runs slightly cooler than normal now. Success, but would have been a lot easier if the engine was checked by us before fitting. So if somebody says it’s fine after sitting around – get it checked out first. That is a lot of man hours gone into this fault-finding which all could have been avoided if little work had been done first time round! But you can take our word for that piece of advise though.

We have another returning for a little Mustang Maniac magic and a service. We just managed to get her under cover as the heavy rain fell.

This car has some rather nice wheels on just like the Eleanor in 17″. 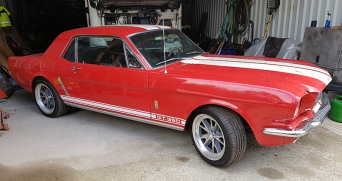 We have some upgrades to the WebShop which are now up and running. The upgrade is a now a video section on the item page in order to show you what the item. This is things like the sequential LEDs for the 2015 Mustang click here for the link or past this to your browser https://mustangmaniac.co.uk/part/36/8996/15_sequential_front_led  this allows you to see the items working before you buy. Another first for Mustang Maniac!

We sell many of these suspension control arms, we fit them and use them. The last two weeks we have two sets returned for the same reason with a complaint.

The reason is that they had seized up straight after fitting and a test drive. Adam took them straight to the workshop and found the “problem” straight away. This is a very simple answer, the joints had NOT been greased before use. The ball joints need to be fully loaded with grease and that is common sense and the grease nipple is a bit of a clue. The rubbers were pulled back to expose the fitting grease was there only, and not been filled with grease.

So, the parts are NOT faulty at all. Adam has refunded the money out of the goodness of his heart, but he now will be careful about supplying parts to these customers in future. As these parts are now technically used, they can’t be sold as new obviously, it’s just as well that  Adam has a couple of project cars that they will be fitted too now. If in doubt about these sort of parts – please seek professional help before blaming the parts.

Adam has now had to create storage for his expanding part lines. The new racking is for the clutches that are bulky and heavy. In fact from what we can tell here at mustang maniac – these clutches are the only ones “In Stock” in the UK.

Adam has also had some bespoke racks made for the more delicate parts such as the window trims that can easily be dented as well as storage for the more awkward items like the radiator shrouds. 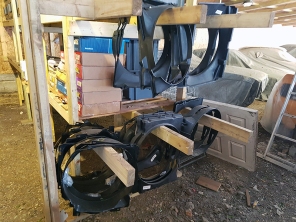 Adam has a new line of fender covers, which are already in use in the workshops and we love them. They cover the complete area around the engine bay.

As Adam says “They ain’t cheap, but it’s a lot cheaper than a respray!” We agree and the part can found by click here, or paste the link to the browser.

Thanks to Paul for sending us in a couple of pics of his car used for a wedding: 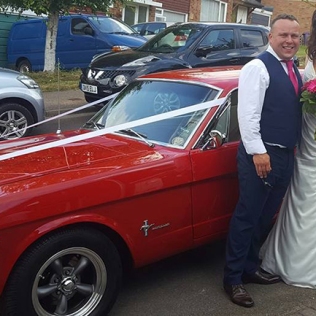 Adam has put up his sign in the office for the “quoted” receipt. A couple of Adam’s lady customers were a little put out (said in jest by the way), that they couldn’t have the same. So Adam is now looking to get one done for the wives to match. And yes, they do accidentally underestimate – just like the men do! 😉

In case you can’t remember:

In fact Adam didn’t charge for the first request to make use of this new facility!

We would like to send our thoughts and best wishes out to all the people who are having to deal with the aftermath of the recent Hurricanes.

7 Responses to Don’t take their word for it!