Last weekend we took two cars to the Birmingham NEC Classic Car Show 2015, the cars had to be there before mid day on Thursday 12th November to be registered in, then the stands and cars could be arranged within the stands which is part of the “Build Up”. First up we had Ken’s beautiful genuine ’66 GT fastback which is used as a daily driver. This was on the Classic American stand and was up for nomination in the “Classic American Car of the Year”. Featured many times in various magazines and a heat winner at previous events. The second car was the first outing in her completed state, the Acapulco Blue ’66 Coupe, which was going to be on show at the Mustang Owners Club of Great Britain. It was a very early start and the sun hadn’t even bothered to get out of bed! We loaded Ken’s GT on first and then Mart’s. We would like to thank “LAR Traffic Services” who’s two tiered transporter was used to get these treasured cars to the NEC show and back safely. 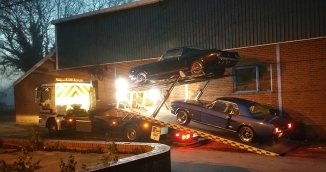 Closer to the NEC the inevitable traffic jams started, but at least the other drivers got to take photo’s of the car before they even got to the show halls.

The cars were driven to their stands, the GT went to the Classic American stand where she received a great clean up so a special thanks to everybody on that stand who helped out and made her look top of her game.

Mart’s Acapulco ’66 Coupe on the MOCGB stand awaiting her final position with the other cars.

The MOCGB stand being set up and the final car positions. A big thanks to Chris York who does a great job each year to show the Mustangs of to their adoring public:

The best time to get some pictures was before the public got to see the cars as the busy crowds makes it difficult to take some pictures. If you see the high visibility jackets in the pictures that’s the reason why.

So where do we start? There are literally thousands of cars there at the show, so we tried to take unusual photos of the many cars there rather than fill the pages up with the normal photos, but some you just have to take. 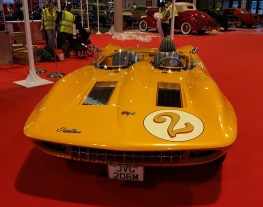 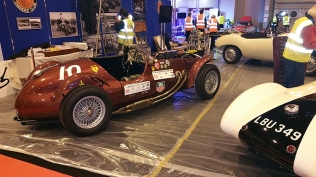 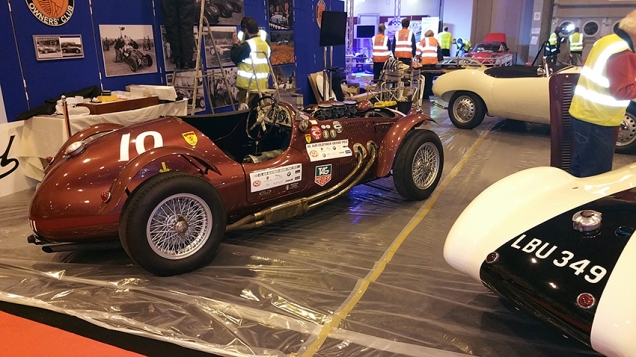 A stand with millions of pounds worth of Ferrari’s lined up, many you don’t get to see, let alone all lined up next to each other. 308, F40, F50, Enzo and the new LaFerrari.

The ever beautiful E-Types & Aston’s 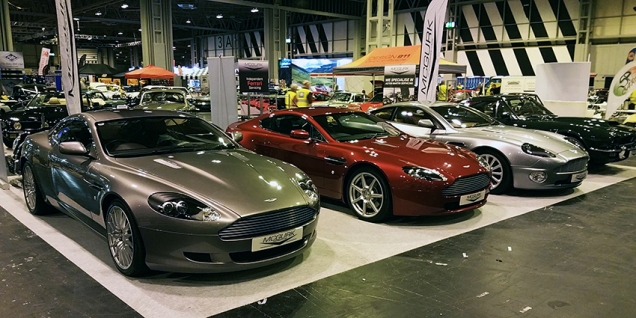 Then the big boys that certainly need no introduction: 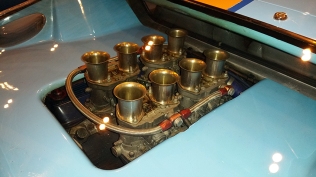 Plenty of replicas and cars up for sale: 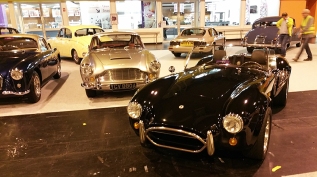 Plenty of Racing cars from various categories on show and a few famous racers too like Graham Hill’s BRM: 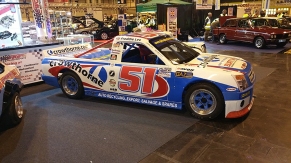 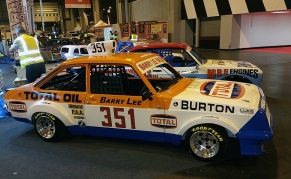 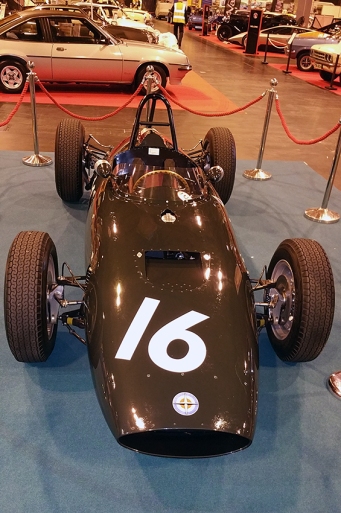 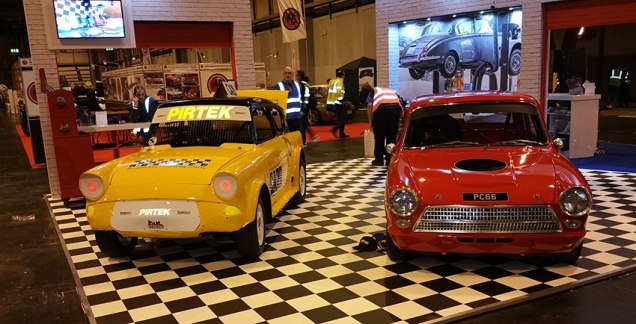 How about some super famous cars; Liberace’s Gold Golfers Coupe and the John Lennon’s Painted Rolls Royce, “beauty is in the eye of the beholder!” 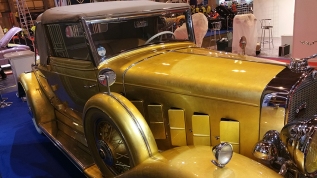 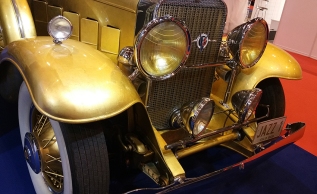 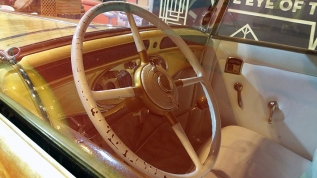 The Thunderbirds movie car from 2004, not the original FAB1 Rolls – but an incarnation of it, it just doesn’t seem right without the big Rolls Grill does it? But it was based on a modified Ford Thunderbird. 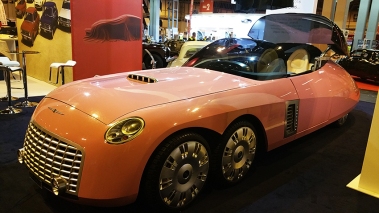 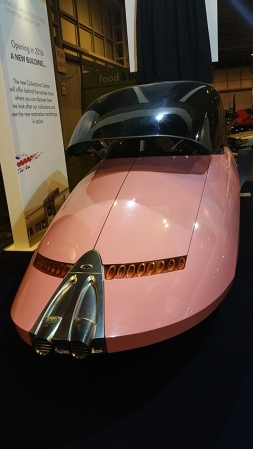 Some restorations projects on the go here

The lull before the storm in just one of the arenas.

Each day the exhibitors are allowed in what time they want early in the morning. A different coloured wrist band for each day of the show is allocated to allow pass in and out of the building. The exhibitors usually find tea or coffee and get out the cleaning materials. Yes, even though the cars were cleaned a few hours ago they were cleaned again. Dust can get on the chrome and make it look tatty believe it or not. Stock is taken out of boxes and laid on the tables with final adjustments to make it look attractive. Announcements are given over the tannoy for the count downs; half hour, fifteen minutes, ten minutes, five minutes upon which the video loops are turned on and music tracks are turned up. With the final announcement “The show is now open” people scramble to take their places finish their drinks and breakfast, trying to make it all look effortless. The first few members of the public filter through, the exhibitors get ready to greet the public hoping that their voices will last the day. If their voices do hold up you can guarantee that the feet may not. What do they exhibitors get out of it if they are not being judged? Nothing, just the thrill of somebody looking and admiring your hard work, that’s it.

The public was let in from Friday onwards and the cars we took to show were very popular. Of course the GT had her crowds  all day, and most of the time was difficult to grab a clear photo from each of the cars. But, on Saturday the MOCGB had a special guest Edd China from the car restoration TV show “Wheeler Dealers”. We managed to grab a few shots of him sitting in our contribution to the club stand, Mart’s Coupe. This pulled in large crowds to see a Celeb’s photo being taken with all the members on the club stand in matching blue polo shirts.

On Sunday we had another visitor to the Acapulco Coupe – Tim Shaw from “Car SOS” tv show. Again this pulled in a large crowd waiting to see another Celeb in the car. 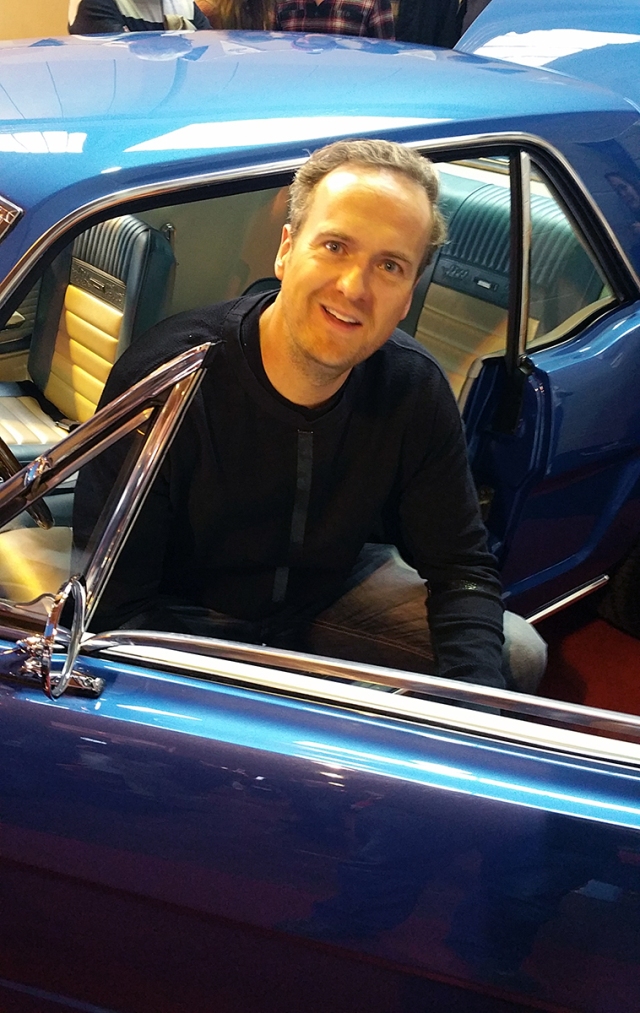 Chris managed to grab a conversation with Tim at the MOCGB stand. The last photo here was a great guy who was exhibiting his car, but was also a dead lookalike for Roy Chubby Brown the comedian. He made us laugh by telling us to “clean the f…. car not just look at it” 😀 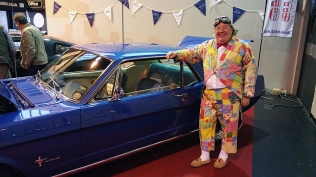 The three days was a long three days it has to be said standing on your feet. The public were great except for a just one woman who didn’t look like she wanted to be there with her husband. Her long face matched her coat that was thrown over her bag, which was in turn thrown over her shoulder, this allowed the metal zip to go clattering against the cars. All the hours of hard work and devotion can ruined by a few seconds of a selfish attitude. All of the cars in the show regardless of make has taken many hours and years of work and dedication, not to mention the many thousands of £££ or $$$ to complete in pretty much all cases, especially when the cars are at this level. Selfish? Yes, because when she was asked to be carefull – there was no apology, just a shrug and huff and walked off.

She may only see this:

All classic car owners will certainly see this:

Anyway the public were asking some great questions and took genuine interest in the cars spending lots of time with the guys and girls on the stands. It has to be said that some showed a little more interest than others. 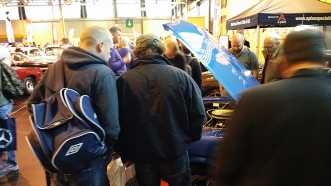 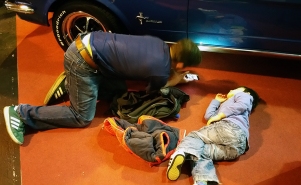 Acapulco Coupe’s first days out with her brand new show board:

At the end of the three days the cars were loaded onto the LAR truck again for a trip back to the yard for a safe storage. We just love this photo: 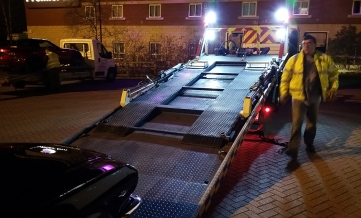 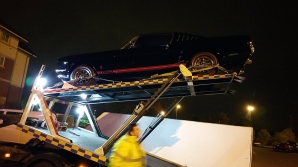 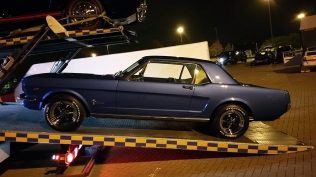 Back at the yard an eerie silence was broken by the bark of the dogs and two Mustangs firing up going back to the covered workshops for a rest. 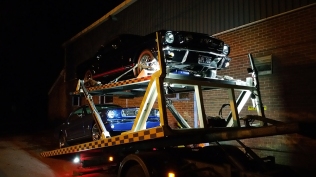 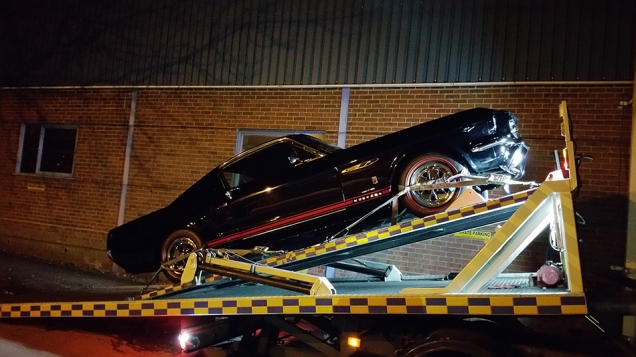 We hope that gives you a little idea of what goes on behind the scenes of a car show. That’s apart from the endless cleaning and removing finger prints from paint work and glass.

We have found some more photo’s while bringing this collection together of when we were in SEMA a few weeks ago. We will have to do a post with more of those pics for you soon.