Well its Easter Sunday and we hope that all your chocolate eggs haven’t melted in the glorious sunshine that we have here in the UK, it certainly makes a nice change. Anyway the show car season is rapidly approaching and we have the usual influx of pre-season servicing. We thought that we would start with a customers car that had a small issue that turned into a bigger problem, but nothing that we haven’t seen before and a fairly common problem in fact.

Marcus noticed a small leak that appeared to coming from the water thermostat housing. You can always tell a leak from this area as the top of the water pump has some nice little pockets to collect the fluids in. After cleaning up the leak and leaving for a few days and not starting the car there was more fluids filling back up again. A leak like this not under pressure can be an issue, but travelling to a car show or accidentally nailing it of the line with a few revs on could be enough to blow the leak into a waterfall and dump your coolant all over the engine bay and over the road. So Marcus contacted us and asked us to look at it for him as it appeared to be coming from the water pump itself.

Like all these things we investigated and discovered the water pump gasket did indeed have some issues. We removed the water pump and the timing cover had some blocked water ports too. While the covers were off we checked over the timing chains and other components to make sure all was OK. The decisions were made to replace both and paint them up to match the engine block again. Pics here of the old corroded water flow ports that would restrict the water cooling efficiency of course. 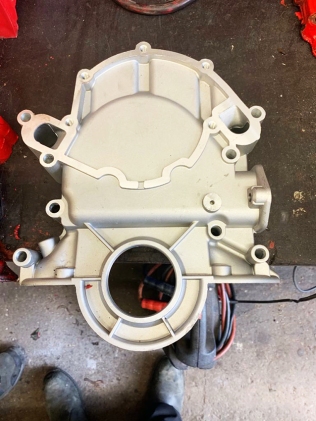 As with all these things we had all the parts in stock, the covers themselves, gaskets, seals and all straight of the shelf into the workshop. The covers were painted and allowed to dry, the gaskets were prepped and the covers were all put back together again. The rebuild of the pulleys were next up along with new pipes, caps, clips and hoses. A new billet water thermostat housing completed the bling which matched the rest of the car’s under hood theme going on.

We filled the car with the mixture of fluids and let her run up to temperature. A quick road test to make sure all was as expected and recheck when we got back. We gave Marcus the call to say his car was ready for collection. So within just 48 hours the car was fixed and back with the owner again, that’s the diagnosis, parts, painting, refitting, fluids and road test.

During the car’s collection Adam explained and showed what had been done to fix the problem.

And of course we just had to have a little video of car leaving the workshop!

Once again we had another happy customer. It just goes to show that it’s best to get these issues checked out sooner than later. Especially after sitting around over the winter.

On a similar theme we sent out a new water thermostat housing and gasket to replace one that was leaking. The leaking part was a cheap Chinese part that looked good and purchased from the internet, but it wasnt up to the job two years later. The age-old saying ‘Chrome don’t get you home’ would certainly have been the case here with a huge failure just waiting to happen. The swap over work was carried out by the customer with no problems. He sent us these pictures just in case we were interested. The leak has now stopped with the correct parts!

You can see why this part started to leak, and who knows where those chunks of metal ended up that had corroded away or broken off? It’s a cheap part for a reason we guess.

These parts may look good for a while, but it also needs to do a job. A lot of the time cars that are resold quickly have these pretty bits on them to make them look good, but after a while they will bring their own problems. Thanks to “Mr. X” who didn’t want to be named, but supplied us with the photos.

The secret project car has had a few more bits fitted and is now common knowledge, with Yogi doing the fettling of the parts to fit. The door workings are in place and now working. The rear light moulding has been test fitted and then the old rear panel sections are to be cut away. 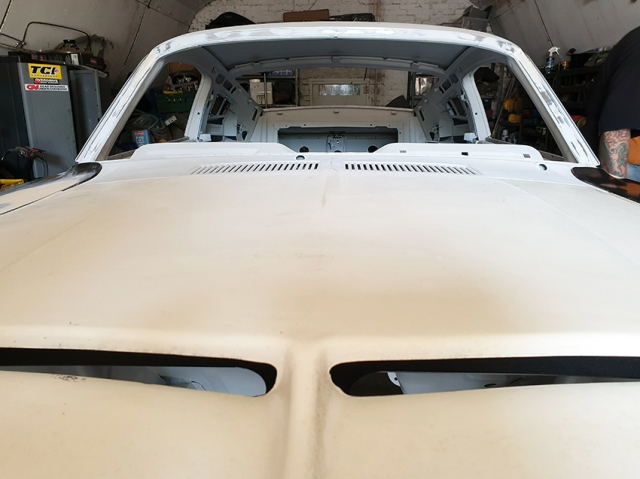 “We broke the mold when Ford launched the Mustang 55 years ago,” said Jim Farley, Ford president, global markets. “Nothing says freedom, the wind in your hair and the joy of driving like Mustang; it’s an icon. The roar of its V8 on a spring day, there’s nothing better. No wonder it’s the most popular sports coupe in the world.”

Mustang was available for purchase in 146 countries in 2018, based on worldwide Ford sales data. More than 500,000 sixth-generation Mustangs have been sold worldwide since 2015, with the pony picking up an additional half point of global share last year to capture 15.4 percent of the segment. This was fueled in part by the new Mustang Bullitt, which exceeded global sales forecasts by 25 percent. Global sales data are based on IHS Markit 2018 total new vehicle registrations for all sports car segments. U.S. sales are based on 2018 industry reported sales. 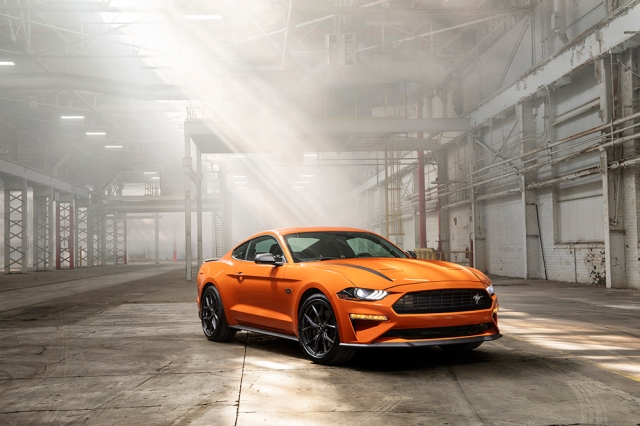 Strengthening Ford’s performance reach for 2020 and just in time for the pony car’s 55th anniversary, the new 2.3L High Performance Package for the entry-level Mustang EcoBoost® creates the most powerful four-cylinder sports car offered by an American automaker. This is the result of a unique EcoBoost engine powered by Ford Performance and upgraded handling components from the Mustang GT Performance Package.

“The Ford Performance Focus RS 2.3-liter engine is a high-revving marvel, and anyone who’s driven this EcoBoost engine instantly loves how quickly it responds and delivers power,” said Carl Widmann, Mustang chief engineer. “When our team got the chance to try this specially built engine in a Mustang, we immediately agreed, ‘We have to do this.’”

Reminiscent of development of the original Mustang in 1964, the car began as a five-person skunkworks project in the Ford Performance garage. Following an experiment with a Focus RS engine swap, the Mustang team leveraged Ford’s quickening product development times to accelerate and complete the design-to-approval process for the 2.3L High Performance Package in under 10 months. Available on the entry-level Mustang EcoBoost fastback coupe or convertible models this fall, the Mustang EcoBoost package was developed to feel at home both on thrilling mountain and coastal roads and even on the most precise autocross courses thanks to its Mustang GT brakes, performance tires, and chassis and aerodynamics hardware from the Mustang GT Performance Package.

Most powerful EcoBoost engine yet in a Mustang

To make their project a reality, members of the Mustang team traveled to Valencia, Spain, home of the Ford Performance-tuned 2.3-liter engine, to convince plant management to build a new variant of the turbocharged four-cylinder specifically for Mustang. Then, with the Ford Performance-designed engine as a starting point, they tuned the EcoBoost to more broadly and responsively deliver a projected 330 horsepower and 350 lb.-ft. of torque achieved with premium fuel (per the SAE J1349 standard). Having secured production of the die-cast alloy block and high-performance cylinder head, the engineering team specified a 5 percent larger 63-millimeter twin-scroll turbo compressor and a larger radiator, then calibrated the engine to run both Ford’s 10-speed SelectShift® automatic and 6-speed Getrag manual transmission. The 2020 Mustang 2.3L High Performance Package is designed to run 0-60 in the mid-four-second range on premium fuel, with top speed increasing to 155 mph, a 10 mph gain over the 2019 EcoBoost Performance Package and 34 mph faster than the base EcoBoost Mustang.

“It’s not just the horsepower gains over the standard 2.3-liter EcoBoost, it’s the broader torque curve that delivers 90 percent of peak torque between 2,500 and 5,300 rpm, which is 40 percent wider than the base EcoBoost engine,” said Widmann. “Plus, horsepower holds stronger up to the 6,500-rpm redline – enabling more usable power and torque for enthusiasts and weekend autocrossers to enjoy.” Helping to deliver 143 horsepower per liter, the new 2.3L High Performance Package includes a fully active quad-tip exhaust system with a signature tuned sound.

FordPass Connect™, now standard on Mustang for 2020, allows owners to interact with their vehicles via a smartphone. Using FordPass Connect’s phone application, owners can locate their parked car, lock and unlock it, and check vehicle status, such as fuel, oil levels and maintenance alerts. For automatic transmission-equipped Mustang models, the system has a remote start feature. The availability of these features varies by market.

We have seen a new sign ready to go up in the Yogi cave. We are not sure who has said what, but a picture does indeed speak a thousand words. Well, in this case just thirteen words in fact. You have been warned 😀 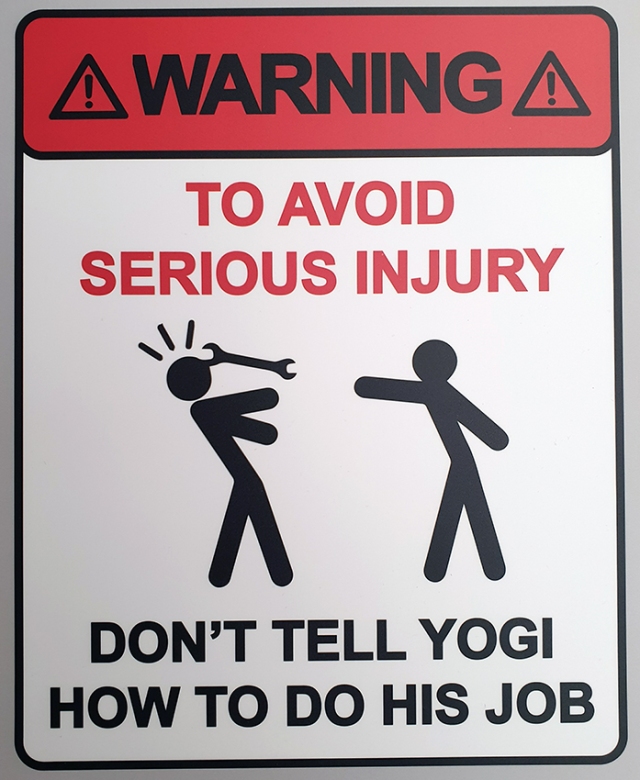 Have a good holidays and any left over chocolate can be found a good home down the yard!

Happy Easter to all our customers and followers.

4 Responses to Check Up