This week we saw another rare car in our yard, this particular car was a Hertz 2007 GT-H which matched our own 2006 GT-H, parked next to each other they really made an awesome sight. The Shelby Hertz cars are rare as only five hundred were made of each and only a few made it to the UK. The number plate on the 2007 is brilliant and matched the car as well as a statement. We can’t tell you what it is of course for privacy reasons, but we liked it, a lot. A number of customers visiting us made a comment of not seeing a Hertz Shelby before and then we have two in the yard at the same time.

A little background to the Shelby Hertz breed of pony:

(#) Head of Ford design, J Mays, had said back in 2004 to expect a series of special-edition Mustangs to keep the stallion kicking, and it didn’t take long for some exceptional variations on a winning theme. First to be announced was the Shelby GT500. This came in Spring 2005 at the New York Auto Show. But that was well ahead of the car’s introduction as a 2007 model. Announced at the 2006 New York show, and introduced as a 2006 model, was the Ford Shelby GT-H. This was a throwback to the famed Shelby GT350H “Rent-A-Racer” program from the 1960s. Ford Motor Company, Shelby Automobiles and the Hertz Corporation partnered to produce a special run of 500 performance-modified Mustang GTs and called them the Shelby GT-H. The H stood for Hertz brand. The cars were available for rent exclusively through the Hertz Fun Collection at select airport locations in Arizona, California, Colorado, Florida, Hawaii, Massachusetts, Nevada, Oregon, and Washington. In order to rent one of the race breed beasts you had to complete an interview which was a lengthy process. The program recalled the 1966 teaming of Shelby and Hertz that got Shelby Mustang GT-350s into the hands of rental customers. Those Shelby GT350H Mustangs became sought-after collector cars. Prepared with assistance from the Ford Racing Performance Group, each Shelby GT-H had black exterior paint set off in gold by Shelby’s traditional “Le Mans” dual racing stripes. Rocker stripes included Shelby GT-H custom look. Each car wore a Hertz Edition emblem on the front fenders, Hertz Shelby GT-H sill plates, and a numbered dashboard badge with Carroll Shelby’s signature.

The Hertz Custom bodywork included a Shelby Performance hood with pins, a brushed aluminium grille with running horse emblem, unique front fascia with integrated lower grille, and side scoops. The Mustang GT’s brakes were dressed up with painted callipers, visible through the GT-H’s 17-inch aluminium wheels with P235/55ZR17 high performance rubber. Ford Racing Performance Group supplied its popular Power Pack kit to add an extra 25 horsepower to the 300-horse Mustang GT 4.6-liter V-8. It raised torque by 10 pounds feet to 330. With the unpredictable skills of rental customers in mind, all 500 GT-Hs got Mustang’s five-speed automatic transmission. In place of the 3.31:1 rear axle ratio used by automatic GTs, however, the GT-H got a Ford Racing 3.55:1 ratio rear axle assembly. The package included Ford Racing’s 90mm Cold Air kit, the Muffler Kit, a new X-pipe similar to the one used on the Ford Shelby GT500, and a performance calibration and a cat-back performance exhaust. To put that extra horsepower to the ground, the Ford Shelby GT-H came with the Ford Racing Handling Pack that included special-tuned dampers, lowering springs, sway bars and a strut-tower brace. Under the hood of the new model GT-H was a security tag on a small wire which identified the engine to the chassis. The tag was to ensure the engine and chassis numbers were tampered with. This was to stop a repeat of the ’60’s where the Shelby engines were swapped out of the Hertz and replaced with a lesser spec engine in it’s place. If you can locate a number matching engine and chassis on an original Hertz the you truly have a rare car indeed.

After the heavy rain this week a burst of sunshine on Saturday morning enabled us to have a proper sweep up. The dogs love a ride in the road cleaner and Adam was happy to oblige them. There is enough space for two dogs in the spare seat, the first two were the lucky ones. 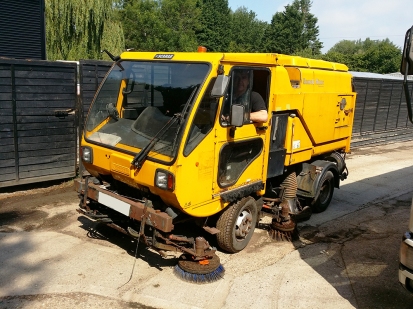 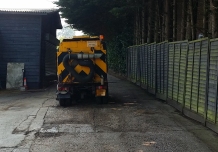 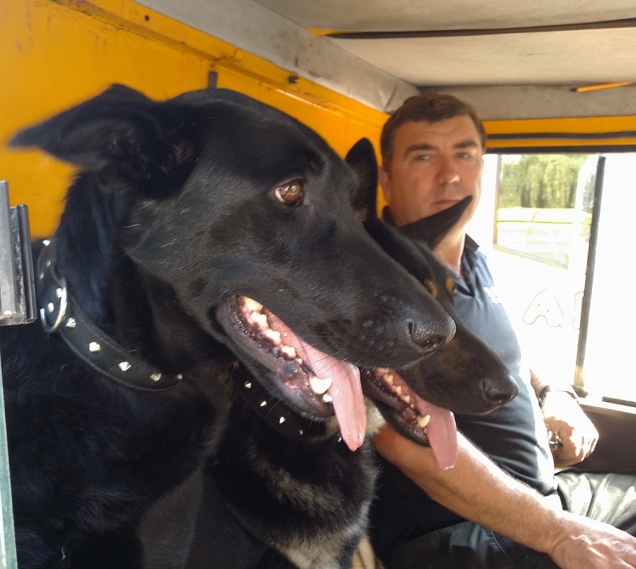 After a stint of cleaning in the warm cab a well earned tea break was in order, in the good ol’ British fashion of course. The other storage sheds for our paints, plant parts and some heavier engineering tools was looking a bit full. So we had a clear out, we scrapped a lot of the stuff we had hoarded for a some time but never used, this made space and easy access for our generators and compressors. A productive week for cars and making the place look a lot smarter.

A business dedicated to restoration of Classic Mustangs. We supply parts, service, restoration and custom builds. Anything Mustang we can help.
View all posts by Mustang Maniac →
This entry was posted in Customers' Cars and tagged dogs, GT-H, hertz, Mustang, Mustang Maniac, rent a racer, road cleaner, scarab, Shelby. Bookmark the permalink.