We have got back into the swing of things and we have been completing a lot of service jobs and not too much on the restoration front. We decided this week that we will give you a lesson in Mustang advertising for something different.

We will start with a little quiz – What has a Poodle, 5000 litres of foam and a Mach 1 Mustang got in common?

The answer is: A Sony advert!

The need for the advert:

Back in July 2007 which wasn’t long ago but seems ages in the terms of technology, a new Sony Pan-European marketing campaign was launched to demonstrate the breadth and depth of the company’s HD proposition and to educate consumers about the intricacies of the new High Definition technology. While there was currently high awareness of HD, there was still a significant lack of understanding amongst consumers, with only 59% having heard the term ‘HD Ready’ and 13% knowing about ‘Full HD 1080’. The Sony HD marketing campaign aimed to educate and inform consumers about the benefits of HD which we now take for granted. The campaign consisted of TV / cinema advertising, in-store branding, a targeted online PR campaign, dedicated HD Flash microsite and a ‘Guide to HD’ DVD which tried to provide consumers with an insight into the full range and benefits of HD.

The ‘Experiment’ (as it was called) campaign, produced by Fallon London, consisted of a sixty-second film and a shortened thirty-second film advertisement and three print executions, this was supported in-store with materials developed by WAVV RAPP Collins. The soundtrack was set provided by Iron Maiden’s – Can I Play With Madness. The ad was directed by ‘Pleix’, ‘Experiment’ shows Sony testing its HD products to the limit with a variety of unusual and creative experiments. An Apricot Poodle, classic 1970 Ford Mustang Mach 1, custom-built industrial bubble machines, neon half-pipe and 5000 litres of foam all serve to create the craziest spectacle that only the very best HD equipment could capture. The ultimate aim of the ‘Experiment’ was to demonstrate how only Sony could offer High Definition like no other. The advert follows the progress of the test poodle inside the Ford Mustang as it passes through a series of experiments. Handycam camcorders record the entire process, Cyber-shot digital cameras photographed the key moments, BRAVIA televisions played back the live action while engineers analysed proceedings on their VAIO.

The Guardian Newspaper ran a story with Sony and this is what they had to say at the time:

“Sony has created an ad featuring a 1970 Ford Mustang, a poodle and 5,000 litres of foam to showcase for the first time in one film the extensive range of high-definition television products the company offers. The surreal-pan European campaign, set to Iron Maiden’s Can I Play With Madness, aims to educate consumers about Sony’s “lens to living room” vision of an HD future. In the ad various Sony products are shown capturing, or displaying, images of a bizarre scene featuring a poodle sitting in a 1970 Ford Mustang Mach 1 on a neon-lit half-pipe, while the car is covered in 5,000 litres of foam. Sony’s ad features a wide variety of products including the PlayStation 3, Bravia TV, Blu-ray discs, Vaio computer, Cybershot digital cameras and Handycam recorder. The ad itself, created by Fallon London, the agency behind the “Balls” and “Paint” commercials for the Sony Bravia, is called “Experiment”. David Patton, Sony Electronic’s outgoing senior vice-president of communications for Europe, said the company was dedicated to an HD future and that 70% of its revenues already came from selling HD-ready products. “HD is Sony and Sony is HD,” he said. “We wanted to show how across our range of products there is the ability to edit, record and watch using Sony HD products. Full HD represents the future of film, television and gaming and yet we’re finding that consumers are still unsure when it comes to understanding the relevance of key components such as HD1080 or Blu-ray disc,” said James Kennedy, the general manager for marketing communications for Sony Europe.”

The car was a genuine 1970 Mach1 Mustang (5769cc engine) imported into the UK. The car was cut in half just for the advert. Little detail is know about the exact origins of the car, we do know that is was supplied by Carolina Classics and was supposedly first registered 27th august 1971. The company wanted to buy the car back after the advert, but apparently didn’t realise it was going to be cut in half.  The differences in colour here we suspect are down to exposure and light, but the advert shows the car as orange and not red. 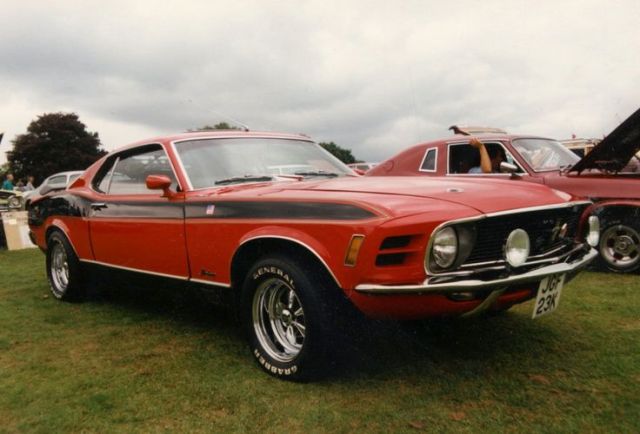 Probable for the first time ever we are going to show you the car as it was genuinely cut in half.

The car interior shows all the details of how it works. 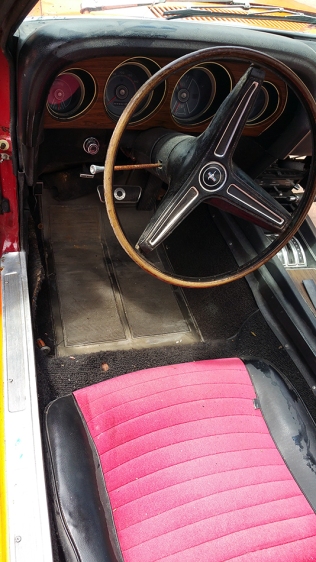 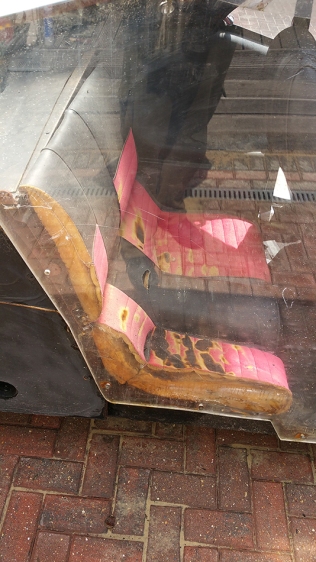 clock cut in half

The engine is held in place by a series of welded supports to stop the engine falling over or out of the car. There is no gearbox in the car, it would have been nice to see that cut in half as well. 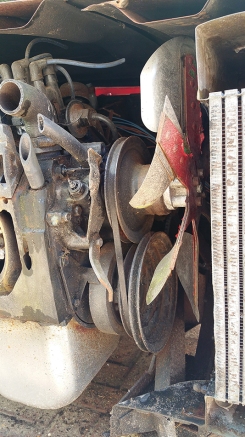 The car does indeed have four wheels, the two standard wheels on the left hand side, and two small wheels on the right hand side. The steering is fully functional to move it about.

A lot of people thought that the car was a CGI fake or that it never happened. We can assure you it did – because we own it.

The contents of this post was prompted by moving the car away from the way wall where it has stood for a number of years now. Chris T, came to see us yesterday so we told he that we had a genuine Half Price Mustang Mach1 up for sale. He looked quite excited – until he realised it was literally in half! But, he still eemed to like though. 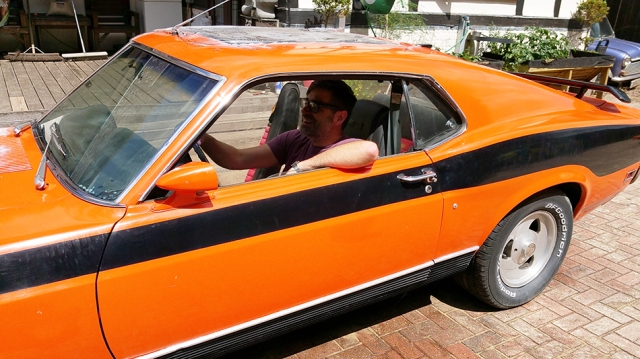 Half price? Well we are not so sure, we were hoping that somebody could tell us, a car that featured in a famous innovative advert at the time and a true one of a kind.

Employee of the Month:

We have not run this category before, but congratulation to Mark AKA “Ruthless” hard at work. He often tells us that he is busy “knocking his pipe out!” 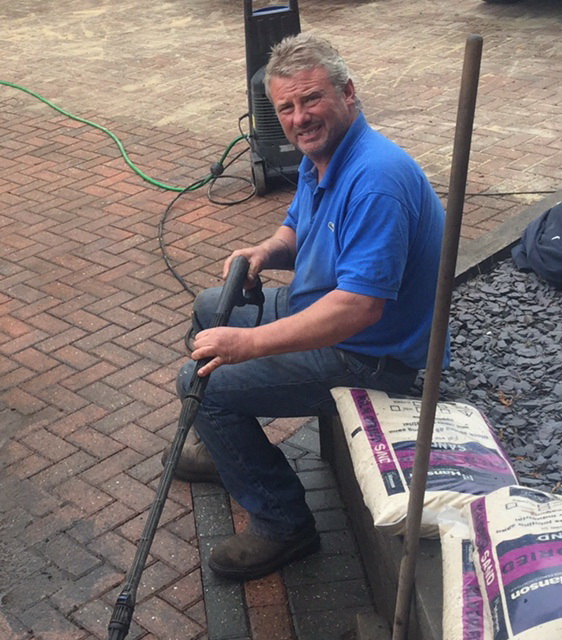 Congratulations to Ken, a friend and customer of Mustang Maniac who was at American Speed Fest today at Brands Hatch. Ken has won the Classic American Best Mustang in show.

It’s Herbie’s time once again. We have pencilled in 28th June for the usual beer and burgers and all things Mustang. Please feel free to join us. (Thanks to “Lob Monster” for letting us know).

A business dedicated to restoration of Classic Mustangs. We supply parts, service, restoration and custom builds. Anything Mustang we can help.
View all posts by Mustang Maniac →
This entry was posted in Uncategorized and tagged American Speed feast, employee of the month, Herbies Bar &Grill, high definition, Mach1, Mustang, Mustang Maniac, ruthless, Sony. Bookmark the permalink.

10 Responses to Half Price Mustang