We left the lovely Oklahoma on our way to Amarillo, now I have said that I bet you are singing the song? We never asked anybody if this is the way to Amarillo either. On our way out of Oklahoma we stopped of here for a little look around to see some history of the famous Route 66 and a shop with a difference. 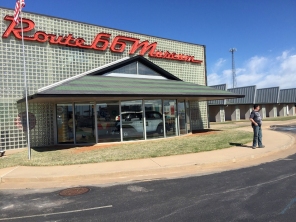 We got back on the road and found a great name for a road.

While we are on the Subject of Mustangs a little know fact about one of our cars. Our 1964 1/2 Indianapolis 500 260cid pace car which was one of only 190 made in hard top came to us from Oklahoma. We have an article all about the Pace Cars click here or it can be found under the “Our Cars” menu heading at the top. This Indy 500 Pace Car is the only known genuine item in Europe and was a complete nut and bolt restoration from the ground up completed by us.

Under the hood of the Pace Car

We have seen some sights on the road and when people say they are moving house in the UK this isn’t quite what they mean.

As we had been traveling for a while at this point we decided that we would stop of for a snack. Well, more like half a cow served up on plate the size of a dustbin (trash can) lid!

I think i just ate this!

Inside was amazing and everything just seemed to be as big as their steaks. I just had to try the 72oz steak that was just out of this world.

After I had finished feeding my face, stomach arms legs or just about anywhere I could put food it was time to move on. I am sure the suspension is a bit faulty as it seems to be sagging now on the driver’s side. 😀

We have seen another famous sight on the road – Tumbleweeds, these things just appear out of nowhere to catch you out. The black blobs on the road are the weeds that just about show up on the pics.

We think this should be the next LAR Traffic Services tow truck back home in the UK! It would frighten the living daylights out of anybody when they see this coming down both sides of the road.

The next scheduled port of call was just outside Amarillo.

The Cadillac Ranch is a public art installation and sculpture in Amarillo, Texas. It was created in 1974 by Chip Lord, Hudson Marquez and Doug Michels, who were a part of the art group Ant Farm. It consists of what were (when originally installed during 1974) either older running used or junk Cadillac automobiles, representing a number of evolutions of the car line (most notably the birth and death of the defining feature of mid twentieth century Cadillacs; the tailfins) from 1949 to 1963, half-buried nose-first in the ground, at an angle corresponding to that of the Great Pyramid of Giza in Egypt.

After all the walking around for a while it was getting near to another meal, this time we had a light(er) meal in this lovely place at the half way point of the Mother Road and our adventure so far. 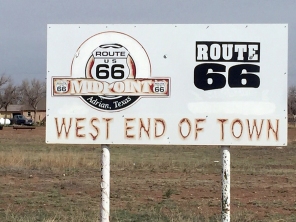 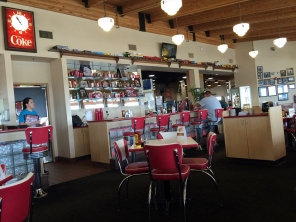 Only another 270 miles to go before we get to our next stop over in New Mexico!

We have had a few fantastic emails from people following our travels with recommendations and places to visit. We try to look at some of them and see if they are doable in our time frame as it were. Some we have managed to visit such as the Cadillac Ranch, and some we haven’t been able to get to.

Thank you to everybody who has taken time out to mail us.